Uniblue closes its doors for good 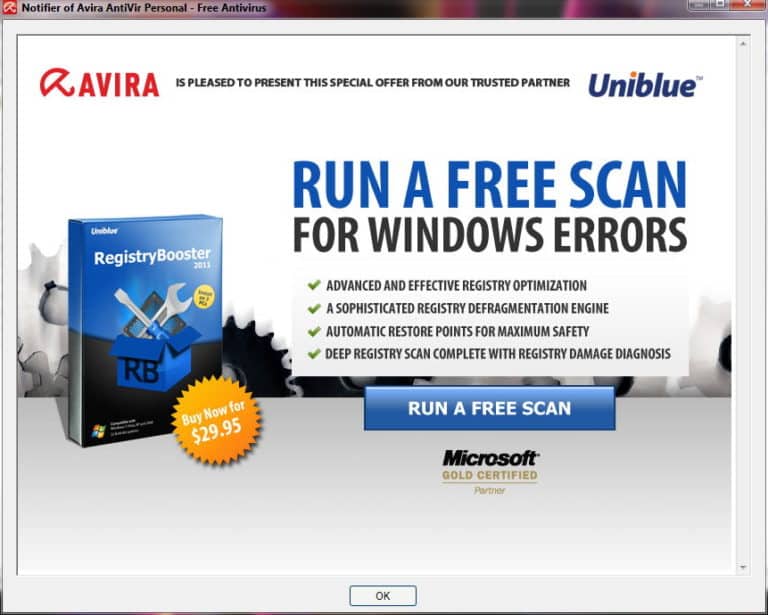 There are some firms you look at with a kind of wary admiration primarily because they were a marketing pioneer of their time. Or that’s what we thought.

Uniblue is one of these companies and, you should believe this is no understatement, it used to be major software developer, with adverts in every location, as little as eight years ago. Before it all went horribly wrong. Now Uniblue has closed the company for good with no prior warning whatsoever.

Uniblue was well-known for system maintenance tools such as RegistryBooster which would scan your system, check for unnecessary entries in your Registry and claim there were issues that needed fixing. Supplied as a free tool, RegisterBooster would bully or scare the user into thinking their system had some serious issues that needed resolving.

To resolve the issues, you had to purchase RegistryBooster. Uniblue produced other software such as DriverScanner, PowerSuite and SpeedUpMyPC which was a general system toolkit. Most of the other tools were legitimate software, used by thousands of people without too many issues. It was RegistryBooster that was the problem.

Without pointing the finger ourselves, Uniblue teamed up with a massive US-based downloads website in 2009 and ran various offers and promotions to encourage their users to download RegistryBooster. They also bought specific adverts that sat right next to a download button stating "STOP! Your system has errors!" or "FREE SCAN!" or similar warnings that encouraged a user to download RegistryBooster from a conveniently placed advert, so the individual thought it was the technology website warning them that their system was faulty -- clever marketing from Uniblue.

I had the "pleasure" of visiting Uniblue in January 2011 at its office in Malta and met with one of their Swedish owners in their rather plush Scandinavian-influenced office. The owners spent less time talking about their software and seemed to keen to boast how much they spent on advertising on this well-known US technology website we mentioned above. It was a good 5-figures/monthly.

That’s before it all went horribly wrong. Users started to realize that they were being warned that their system always had errors. Indeed, someone who bought RegistryBooster fixed the errors, re-ran the software, to find it reported they had errors again. An individual cottoned on to the fact that this was bogus software as a brand new out-of-the-box PC would be deemed to have "errors that need fixing" even after the first boot. Indeed, someone proved you could install a fresh copy of Windows, with no third-party software, install RegistryBooster and it would still claim your system had errors.

It all came to a head in September 2011 when a plaintiff called Mary Webb (and plenty of her supporters) took Uniblue to court in the States citing that RegistryBooster did not function as advertised. Mary Webb won the case in 2012 and the court ruling stated that "anyone who purchased anything from Uniblue in the last four years may be entitled to collect $12.50 for any combination of deceptive practices (such as empty claims about what a software can do) or problems with auto-renewal".

As Uniblue had hundreds of thousands of users and that RegistryBooster had a relatively low RRP, $12.50 per user was a significant amount of revenue. Uniblue was ordered to pay the defendants attorneys’ fees and costs (approved by the Court in an amount not to exceed $1,200,000). Problem is, individuals who wanted to claim their $12.50 had to put in a request by January 2013 and it’s never been clear how many individuals were paid compensation or what happened since.

It’s amazing that Uniblue managed to continue in business until 2018 as a result of this court ruling. You can only assume that the court action caught up with it eventually. We do know the original Swedish owners sold the company in early 2012, long before the court settlement.

5 Responses to Uniblue closes its doors for good