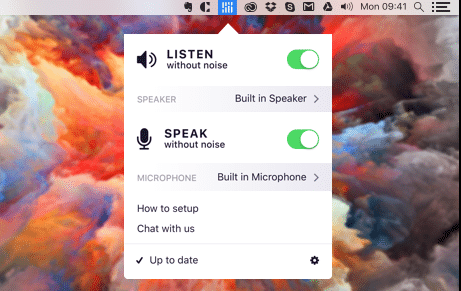 The rise of homeworking means one thing, trying to focus on work whilst the family and daily chores are going on around you. Get on a conference call and you have to try and eliminate background noise to sound professional. When you’re on a call you suddenly realize how much noise is going on around you.

Get in the car and head to a coffee shop and you'll find there are people talking around you -- it’s no better at all. You just cannot seem to get away from surrounding noise. And that’s if you can even get a fast enough internet connection and a stable enough call to make it worthwhile and professional enough to impress the other callers.

Krisp 0.6.8 is a public beta of a brand new tool which has one job and that’s to reduce or virtually eliminate background noise. Using neural network artificial intelligence, Krisp will asses your voice and learns your speech, prioritizing this over other noise and thus reducing background sounds which may interfere with your call. Krisp will mask itself as two new input and output devices which process the sound captured by your microphone and remove the other components which can interfere with your mic.

At this stage, it’s worth pointing out that Krisp is Mac-only, but a Windows version is in development and is due for release shortly. Krisp is also in public beta (and, as a result, available free of charge).

As the app installs itself on your operating system, it does not discriminate between conferencing apps, so it will support Skype, Slack, Webex, and join.me. Krisp is planning to launch a gaming specific app, which is ideal given the increase in team e-sports and the need for clear communication.