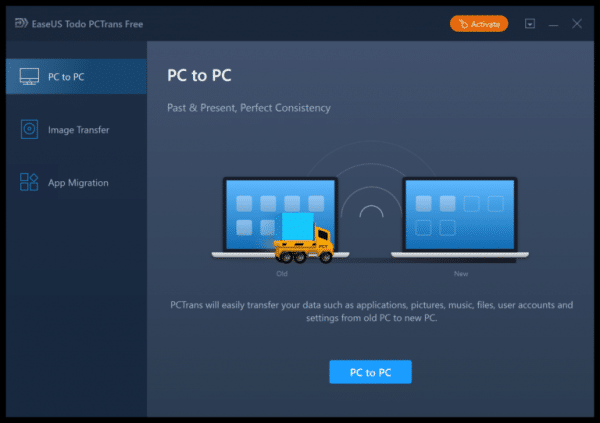 Boot into your brand new PC and you find you’re welcomed by rather a vanilla operating system, perhaps with a few key default apps installed by the manufacturer.

Although it’s initially interesting to start with a blank canvas, you soon realize not only do you have your most important applications installed but the settings and preferences all need to be setup again from scratch.

And this can take ages to reconfigure. You could have simply backed up your previous drive and migrated to the new machine, but this isn’t ideal as all your drivers were setup for the previous computer. You simply want your apps migrated.

EaseUS has launched Todo PCTrans 10 and this is our favorite tool for migrating our apps to any new or second PC. You may also point out that Laplink PCmover would be the first choice, but that brand dominated the market for so long they became arrogant (we won’t go into details) and difficult to do business with. Luckily there’s an alternative.

Todo PCTrans 10 has a Free and Pro ($49.95) alternative. The Free is quite simple. If you want to migrate apps to a new computer, you’re limited to two choices. But almost everyone has more than two apps they want to migrate. The Pro version offers the ability to move your entire user account from your old computer, meaning everything is quickly migrated. You still get to keep your Windows installation (and the relevant drivers for your new PC), but you also get all your apps, settings, preferences, images, documents and other important data.

You can also use PCTrans to migrate an entire disc image, but many other tools (including backup tools such as Acronis True Image or O&O DiskImage) will also migrate a disc image. What makes PCTrans unique is you can pick and choose the individual apps.

What’s new in PCTrans 10? A brand new streamlined user-interface, which looks absolutely fantastic. The latest v10 is the first to support the migration of entire user accounts (Pro only), the ability to transfer Microsoft Visual C++ packages, along with other minor transfer improvements.