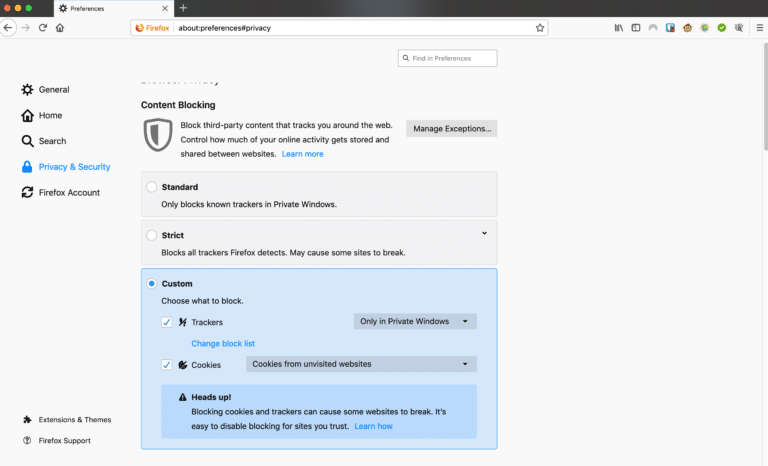 Mozilla has just released Firefox 65.0 for Windows, Mac and Linux, along with Firefox for Android 65.0. The major highlight of this new release are improved tracking protection controls, improved multilingual support and the ability for macOS users to transfer tabs to their iOS devices via HandOff. Android users should see that scrolling performance is improved.

Firefox 65 rolls out a redesigned set of controls for its Content Blocking feature. Users can access these via the 'i' icon on the Address Bar, or by visiting the Privacy & Security section of Firefox’s settings dialog.

There are three distinct options available: Standard, the default, is where known trackers are blocked, but only in Private Browsing Mode for now. Strict blocks all known trackers in all windows, while Custom allows users to pick and choose their behavior.

Mac users gain support for HandOff, allowing them to pick up open browsing tabs on iPhone and iPad with Firefox for iOS as well as the built-in Safari browser.

Multilingual users will be happy to see an updated Language section under Preferences where they can install multiple language packs and set preferred language order for both Firefox and websites.

Changes include better security against so-called 'stack smashing' attacks and an improved pop-up blocker capable of preventing websites opening multiple pop-up windows at once. There are also automatic warnings before closing any browser window (even with automatic session restore), and additional view options under about:performance (memory usage for both tabs and add-ons).

Android users should find scrolling is faster and more responsive, while Chromecast controls have been restored to the location bar.

Firefox Quantum 65.0 and Firefox for Android 65.0 are both available now as a free, open-source download for supported versions of Windows, Mac, Linux and Android.