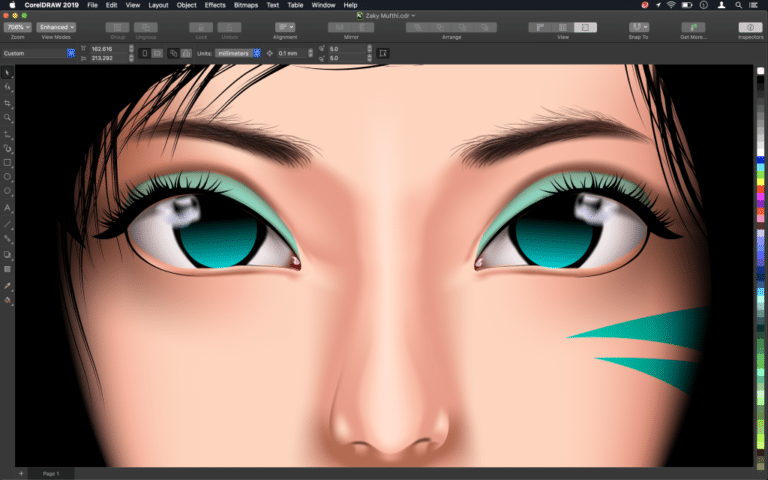 Corel has unveiled CorelDRAW Graphics Suite 2019 as part of its 30th-anniversary celebrations for Windows and -- for the first time -- Mac. The brand-new Mac release is fully native, and includes all components found in the Windows version, including CorelDRAW and Corel PHOTO-PAINT.

Also new in the 2019 release is a brand-new Objects Docker for controlling document structure, non-destructive effects, and a new web app (CorelDRAW.app) for accessing and editing cloud-hosted Corel documents through other devices.

The headline surrounding CorelDRAW 2019’s release is undoubtedly the fact it’s now available on Mac as well as PC. All key apps have been written natively for the Mac platform, with Corel keen to highlight the suite’s unique features to woo Mac users from other platforms, most specifically LiveSketch for simplifying the sketching and drawing of complex vector shapes on any pen-enabled device.

The Mac apps have also been designed to take advantage of native Mac features, including the MacBook Pro’s Touch Bar as well as Mojave’s Dark Mode.

Windows users haven’t been neglected with the new release, which continues Corel’s tradition of evolution over revolutions by unveiling a handful of new features alongside refinements to existing ones.

New features include a web-based CorelDRAW.app for both Windows and Mac users. It allows users to access cloud-hosted CorelDRAW files, add annotations and other design elements, plus start new projects from any internet-connected device.

There’s a brand new Object Docker, designed to give users full control over a document’s structure and easy, fast access to its components.

Support for non-destructive effects has been added too -- both vectors and bitmaps are supported, along with Pixel Perfect Workflow, designed to aid the creation of crisp, perfectly aligned web graphics.

Users also gain access to new modern templates as well as the ability to customize them via the redesigned 'New from Template' dialog.

CorelDRAW Graphics Suite 2019 is available now as a trial download for multi-core PCs and Macs with 2GB RAM or later. PCs require Windows 7 or later, Macs must be running macOS 10.12 or later. The full version can be purchased as a standalone license ($669), an upgrade ($329) or via subscription ($198 for 365 days).