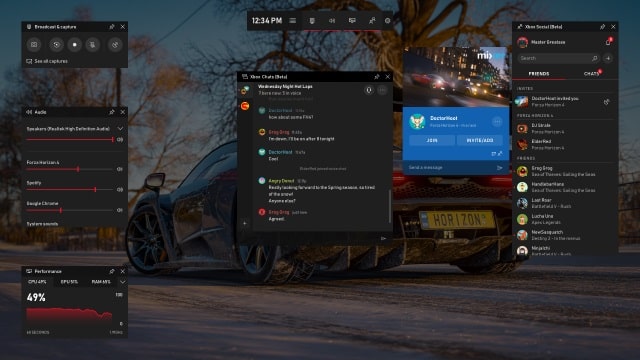 If you're signed up to the Xbox Insiders program, you can beta test an updated version of the Game Bar in Windows 10. Originally designed to allow for recording and broadcasting of game footage, The Game Bar now includes Spotify integration and cross-platform messaging.

The Game Bar beta also includes a number of new widgets that can be used to monitor system performance, control audio, and more.

Spotify is certainly the big news here, and the addition of the streaming music service to the Game Bar will be welcomed by gamers who need more than just in-game music. You'll need to have the Spotify app installed as well, but the new widget allows for control of playback while gaming. Another new feature is a meme creator that lets you add text overlays to screenshots and video captures.

For people who like to keep an eye on CPU, GPU and RAM usage, new performance widgets are on hand to provide all the information you need. Microsoft has also added new social options:

In the new Xbox Social widget, you can now see what your friends are playing, and you can quickly text them, voice chat them, or watch their Mixer stream all from within the Game bar. The same friends list and communication features work on Xbox One as well as within the Xbox App on iOS, Android and of course Windows 10.

If you're interested in testing out the Game Bar beta, Microsoft explains how to get your hands on it: