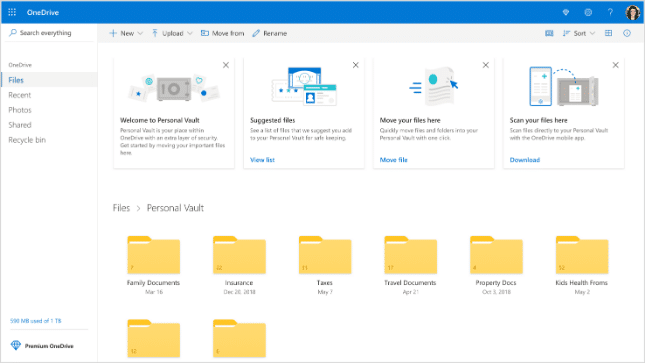 Long gone are the days where consumers were expected to backup data to clunky external hard drives to prevent losing files to a hardware failure (something many never bothered to do). These days, many of their documents and photos are saved in the cloud. Cloud storage is hardly perfect from a security and privacy standpoint, but for many consumers, it is an essential way to backup and access files. I'd rather consumers trust the cloud as opposed to not backing up at all and transferring files with non-encrypted USB flash drives. As they say, "don't let perfect get in the way of better" -- the cloud is better.

And today, OneDrive is getting better too. You see, Microsoft will soon be launching a new feature called "OneDrive Personal Vault" which will allow users to better secure their sensitive files in the cloud. Its brilliance is seemingly in its simplicity -- it is a OneDrive folder with a bank vault icon that requires additional authentication, such as SMS, biometrics, a pin, or the Microsoft Authenticator app. Visually, it should be easy for consumers to understand, which is essential. You can even "scan" documents directly to this special folder using your smartphone camera. Best of all, access to the Personal Vault is restricted after a period of inactivity, forcing a new authentication.

"Personal Vault is a protected area in OneDrive that you can only access with a strong authentication method or a second step of identity verification, such as your fingerprint, face, PIN, or a code sent to you via email or SMS. Your locked files in Personal Vault have an extra layer of security, keeping them more secured in the event that someone gains access to your account or your device. Plus, this added security doesn’t mean added inconvenience. All your documents, photos, and videos in Personal Vault are easy to access on Onedrive.com, your PC, or capable devices, says Seth Patton, General Manager, Microsoft 365.

Patton further says, "Personal Vault uses more than just two-step verification to help keep your files safe and private. On Windows 10 PCs, OneDrive syncs your Personal Vault files to a BitLocker-encrypted area of your local hard drive. And like all files in OneDrive, the contents of your Personal Vault are encrypted at-rest in the Microsoft cloud and in-transit to your device. For further protection on mobile devices, we recommend that you enable encryption on your iOS or Android device. Together, these measures help keep your files protected even if your Windows 10 PC or mobile device is lost, stolen, or someone gains access to it."

Strangely, OneDrive Personal Vault will not initially launch in the USA for some reason. Instead, Microsoft will bring it to Australia, Canada, and New Zealand first. The company promises a global roll-out to be complete by the end of the year. So, yeah, we Americans must wait. Sigh. 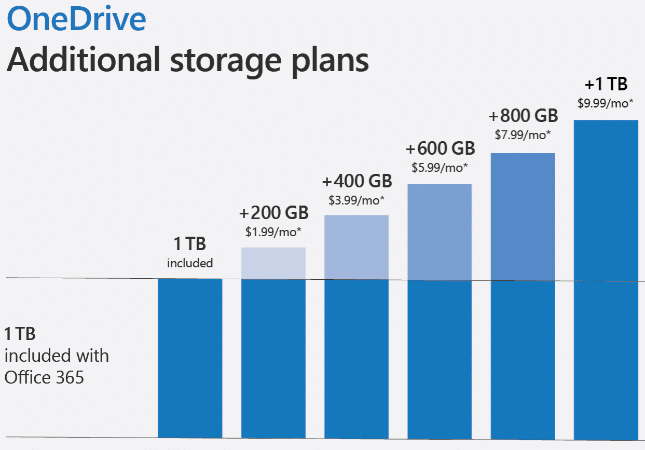 In addition to Personal Vault, Microsoft is showing off some new Office 365 personal storage pricing plans, which you can see above. The base remains at 1TB, but you can now add additional capacity in increments of 200GB. Those of you without Office 365 that are paying $1.99 monthly for 50GB are in for a treat -- you will be bumped up to 100GB at no additional charge.