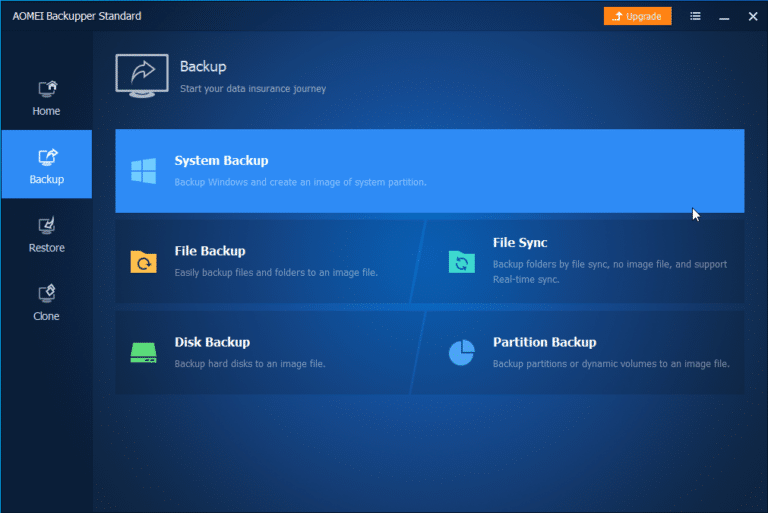 Version 5 unveils a long-overdue design refresh, attempting with some success to provide a flatter, more modern interface in keeping with Windows 10. There’s also the promise of faster file sync, but in the main the program’s functionality remains identical to earlier versions, providing file- and image-based backup, sync and cloning.

The new user interface is a minimalist affair, with users provided with two basic options: backup and restore on the Home page. Users can also switch between backup, restore and the clone features via a series of buttons down the left-hand side of the screen.

All five are largely self-explanatory -- System Backup produces a drive image of all the partitions required to boot Windows, while File Backup provides users with simple options for backing up selected folders or files to another location.

Users can set schedules with full and differential options available for all users, with incremental backups, support for schemes (the ability to manage backup space by removing older backups when space runs low) and real-time file sync support among several options restricted to Pro users.

Other changes in version 5.0 include the promise of improved performance with file sync, and a streamlined method for creating the essential bootable rescue media using Windows PE. Pro users also gain a new Pre/Post Command option, which enables them to execute commands and scripts before and after backup/sync operations.

Two fixes have also been applied: the program should now display correctly on high-resolution displays, while file sync operations are no longer halted because of long file paths.

AOMEI Backupper Standard 5.0 is available now as a freeware download for PCs running Windows XP or later. Paid-for versions are also available with additional features such as command-line usage, disk space management and the ability to merge backup images. Prices start from $54.95 for AOMEI Backupper Professional.