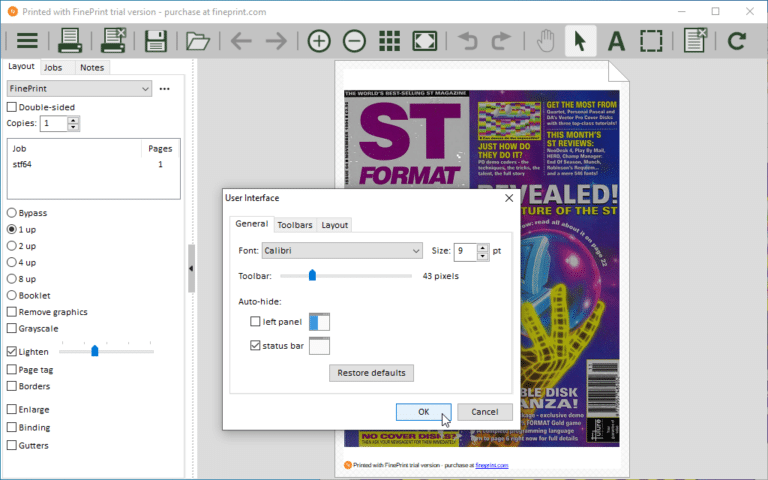 FinePrint Software has released both pdfFactory 7.0 and FinePrint 10.0 for Windows PCs. pdfFactory 7.0 provides PDF creation tools, and offers a more fully featured Pro version with PDF-editing capabilities, while FinePrint is a universal print previewer designed to save users time, ink, paper and other resources.

The latest version of both tools focus on improving and future-proofing their user interfaces to work with high-definition monitors.

Both tools share a similar user interface, and the latest updates apply across both. The key changes are all designed to better facilitate people’s growing use of ultra-HD displays.

First, users gain a new resizable toolbar specifically for use with larger monitors. New scalable, vector icons have been designed specifically to support this new feature.

Users access this new feature through the programs’ new User Interface dialog box. Here they will also discover new options for changing the program’s font (and font size) to also work better with larger monitors. In a similar vein, tooltips have been redesigned to provide greater clarity.

Both applications also benefit from performance improvements -- most visible when generating thumbnails -- and added support for Windows Server 2019.

pdfFactory users benefit from a handful of user interface tweaks to the Jobs screen, ensuring controls remain in a consistent place as new jobs are added while making it easier to rename individual job titles. FinePrint users gain one app-specific improvement: the ability to darken printouts as well as lighten them via the program’s Lighten control.

Both pdfFactory 7.0 and FinePrint 10.0 are available now as free trial downloads. Workstation versions require Windows XP SP2 or later. Both pdfFactory 7 and FinePrint 10 cost $50 ($60 for Server Edition) each, with upgrades from version 6 costing $20. pdfFactory 7 Pro costs $100/$120 (upgrades $40). Users who purchased the previous version of either program after April 1 2019 are entitled to a free upgrade to the latest version.