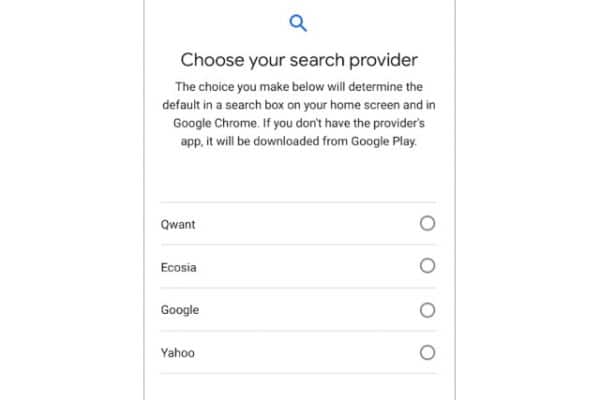 In response to a $5 billion fine for antitrust violations in Europe, Google has announced that it will introduce a new "search engine choice" option next year. It's an idea that is similar to the Browser Choice screen Microsoft introduced following anti-competition complaints about Internet Explorer.

Google will "introduce a new way for Android users to select a search provider to power a search box on their home screen and as the default in Chrome (if installed)" in Europe starting in 2020. The search engines that appear in the list will be determined by auctions. Google rivals will have to bid to be featured in the list, meaning the company will -- controversially -- make money from giving users choice.

Writing about the upcoming change in a blog post, Google says: "Earlier this year, we presented Android users with an option to download additional search and browser apps in Google Play. This follows the changes we made to comply with the European Commission’s decision on Android".

Next year, we'll introduce a new way for Android users to select a search provider to power a search box on their home screen and as the default in Chrome (if installed). Search providers can apply to be part of the new choice screen, which will appear when someone is setting up a new Android smartphone or tablet in Europe.

The controversial part is not really mentioned in this blog post, although there is a link to another blog post that explains it further. Google says that "eligible search providers will need to fill out an application form and can bid for inclusion based on an auction".

Expanding upon this, Google explains:

Google will use a first-price sealed-bid auction to select the other general search providers that appear in the choice screen. Google will conduct auctions on a per-country basis for the period from January 1, 2020 to December 31, 2020. Following the initial round of auctions, any subsequent rounds will occur once per year.

In each country auction, search providers will state the price that they are willing to pay each time a user selects them from the choice screen in the given country. Each country will have a minimum bid threshold. The three highest bidders that meet or exceed the bid threshold for a given country will appear in the choice screen for that country.

The auction winners, and Google, will be ordered randomly in the choice screen. In the event of a tie, Google will allocate the slots randomly among the tied bidders. In the event that fewer than three eligible search providers meet or exceed the bid threshold, Google will fill any remaining slots randomly from the pool of eligible search providers. The pool of eligible providers will include those that applied to participate in the choice screen but did not submit bids.

The fact that it is the highest bidders that make it to the list is likely to prove controversial. Not only does it mean that Google is going to profit from introducing the new search choice screen, but it also prices the smaller players out the market. Considering the screen is being introduced following an anti-trust case this is, frankly, a bit of an odd decision.