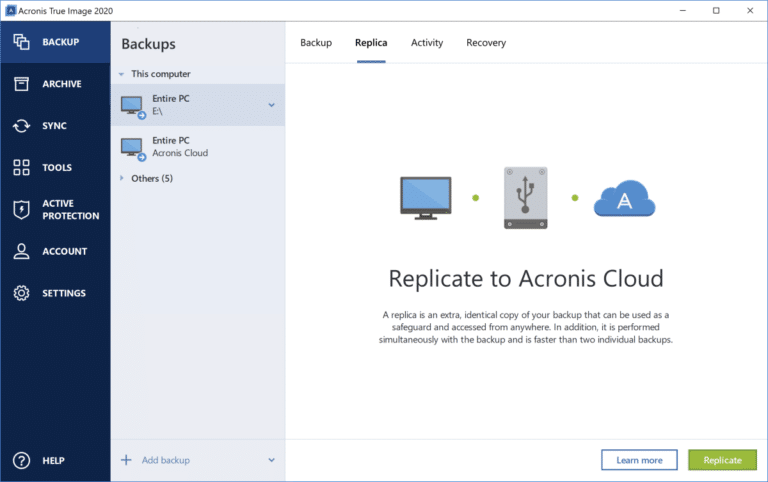 Acronis has launched Acronis True Image 2020 for Windows and Mac, a major new release of its popular local and cloud backup tool.

True Image 2020 debuts its dual-protection feature to allow local backups to be automatically replicated in the cloud. Other new features include a new notifications center, greater control over key aspects of the program and the promise of backups that are "at least 50 percent faster" than the previous release.

The headline feature in Acronis True Image 2020 is dual-protection. A subscription to Acronis Cloud is required to use the feature, which allows users to specify that locally stored backups are automatically replicated online via the Replica tab found in the Backup section.

Users are also promised access to better information through a new Tray Notifications Center, which provides information about backup status, tips for improving backups and alerts for potential problems.

Several new options have been added with the aim of providing greater control over key aspects of the program. Users can now specify trusted Wi-Fi networks to ensure cloud backups are never made over insecure networks. The feature can also be used to avoid wasting bandwidth on metered networks.

Under the hood, new backup technologies promise to improve the app’s backup speeds by 50 percent or more over the 2019 release. Improvements have also been applied to restoring data from the cloud, while Mac users can now more easily restore data to a new machine, even when spread across multiple APFS volumes.

The app’s Acronis Active Protection technology, offering protection against ransomware and cryptojacking, has also been widened to block illicit service termination attacks and provide more information why specific processes have been flagged.

Acronis True Image 2020 is available now as a free 30-day trial download for PCs running Windows 7 SP1 or later as well as Macs running macOS 10.11 or later. Prices start from $49.99 for a one-time purchase, or $49.99 for a single year’s subscription, which includes access to cloud backup features with 250GB storage space.