Apple releases macOS 10.15 Catalina -- and it's breaking some apps 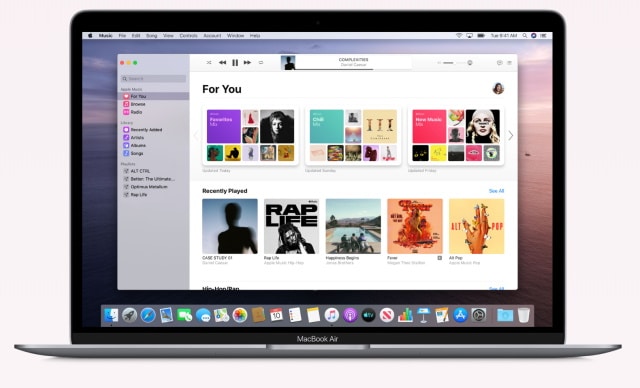 After a period of beta testing, Apple has released macOS 10.15 Catalina for everyone. There's quite a lot to the latest version of the operating system, including the break-up of iTunes, an update to Sidecar that lets you use your iPad as a second screen for your Mac, and numerous security updates.

However, the dropping of support for 32-bit apps (Catalina is fully 64-bit), means some people installing the free update are finding that the apps they rely on no longer work. More than this, Apple has even gone as far as warning people who are reliant on XML files -- such as DJs -- to hold off installing the update for the time being

While the switch to 64-bit only has been broadly welcomed, it is not without its problems. During the installation of Catalina, a warning is displayed about the loss of support for 32-bit apps, but this has not stopped some users from being caught out.

The break-up of iTunes into a number of separate apps has also led to issues, affecting DJs in particular. It is very common for DJs to organize music in iTunes, create playlists, and then use the "Share iTunes Library XML with other applications" to access the music in other apps. However, the new Music app uses a different format to organize music libraries, so this methods of sharing can no longer be used. Developers will need to update apps in order to use the new formats and in the meantime, as the Verge explains, Apple is advising people who rely on XML files in this way to stick with Mojave for now:

According to Apple if a customer is reliant on XML files for DJing, they should avoid updating and continue using their preferred software on macOS Mojave until developers push out fixes (some, like Serato, are already trying out new beta versions tailored for Catalina).

But for anyone who does upgrade, there are new security and privacy options, the introduction of Screen Time for computer usage monitoring, and the arrival of Apple Arcade. The ability to use an iPad as a second screen is something that will be welcomed; Apple explains how it can be used:

The new Sidecar feature extends a user’s Mac workspace by using iPad as a second display, allowing them to spread out their work. With Sidecar, you can use an iPad display for tablet input to draw, sketch or write with Apple Pencil in any Apple or third-party Mac app that supports stylus input. Sidecar runs on a wired connection so users can charge their iPad as they work, or on a wireless connection for greater mobility, using everything from illustration apps and video editing apps to 3D apps, like Photoshop, Illustrator and ZBrush.

Apple also highlights a number of other new features in Catalina:

8 Responses to Apple releases macOS 10.15 Catalina -- and it's breaking some apps