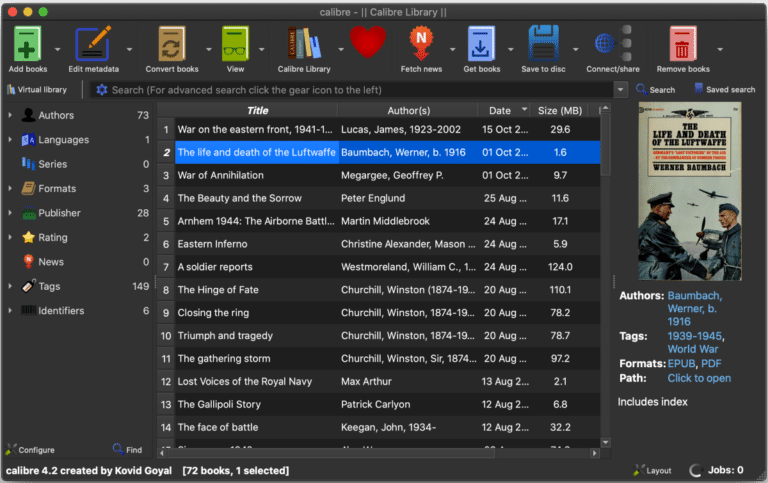 Version 4.2 comes a fortnight after version 4.0 was released. This update promises improvements to macOS dark mode support and the Viewer application, including the generation of covers and table of contents.

Version 4.0’s primary function was to migrate the program from Qt WebKit (no longer maintained) to Qt WebEngine while preserving backwards compatibility with all existing features. This led to -- among other things -- a completely rewritten eBook Viewer that hides controls by default to emphasize the text being read.

Version 4.2’s changes focus primarily on further improvements to this component. Covers are no longer generated for books that have no cover, while the Viewer will attempt to generate a table of contents from headings if no ToC currently exists.

The Print to PDF functionality has also been restored, and users also gain the ability to jump to book positions via Go to > Location. The bookmarks panel is now easier to use with just keyboard controls too.

The rendering of comics has also been improved, with blank pages eliminated after large images or after every image in multi-page mode.

When outputting to FB2 format, both image conversion and external link handling is handled more quickly.

Version 4.2 also fixes numerous bugs and regressions -- users can see a full list of changes in this and previous releases by visiting the Changelog.

Human skills are essential to the success of SOCs

Sudo vulnerability could give attackers root access on Linux systems

What are the things to consider before moving to the cloud?