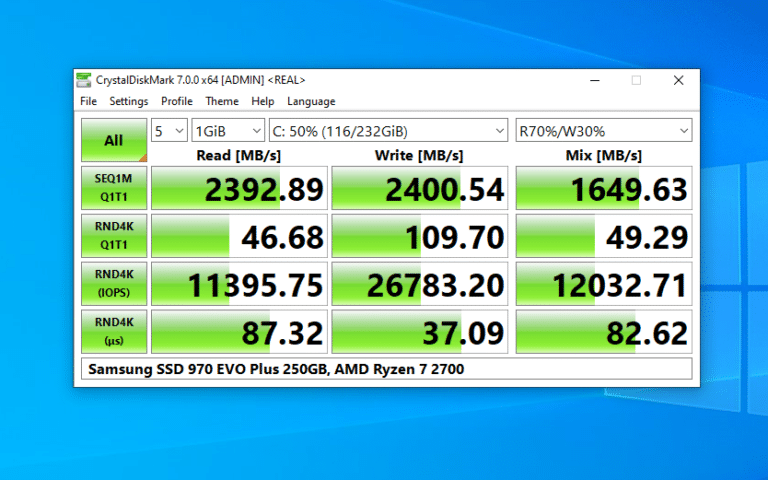 Version 7 debuts a rebuilt user interface using GDI rather than HTML, plus adds a new performance profile and mixed test while tweaking two existing tests. Support for ARM64 processors has also been added.

CrystalDiskMark will appeal to users quickly wishing to benchmark their hard drives, whether it’s to gauge current performance or see if that new NVMe SSD drive really is that much quicker than traditional SATA-based models.

Version 7 opens with a rebuilt user interface -- subtly tweaked during the transition from HTML to GDI. It retains its simplicity however -- select your drive, choose your test settings and click ‘All’ to run them all or select a specific test to run.

Version 7 throws in a new mixed read/write test to accompany the standard standalone read and write tests, which in turn leads to new peak and real-world performance profiles. When selected, users will see a new dropdown menu allowing them to specify the split between read/write as a percentage.

The sequential benchmark block size has been increased from 128KB to 1MB while the random benchmark switches from Q8T8 to QT32T16.

Other changes include preventing the program from running without elevated administrator privileges, a new option to change the program’s fonts to suit personal tastes (Theme > Font Setting) and the addition of an ARM64 build for compatible processors.

The DiskSpd Affinity option has been changed from -ag to -n to spread the benchmarking more evenly across the user’s multi-core processor, although users can switch back to the -ag option via Settings > Queues & Threads.

Support for Windows XP and 2003 has been dropped in the installer version, but the portable version continues to support both.