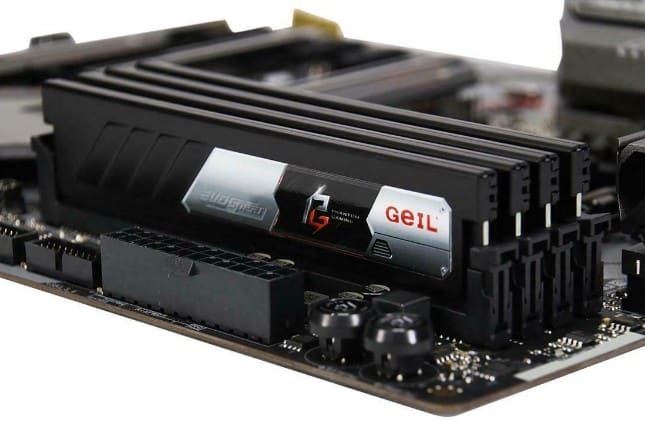 When building a gaming PC, one of the most important purchases you can make is memory. With that said, you don't necessarily need a ton of RAM, nor do you need the fastest. In other words, for gaming, 16GB of memory is still totally fine -- 32GB is more of a want than a need. Unless you are using an integrated GPU, such as an AMD APU, faster RAM speeds won't necessarily give you better game performance either. Currently, 16GB of 3,200MHz memory seems to be the sweet spot -- a good performance/value balance.

Today, GeIL launches its latest such gaming memory. Called "EVO SPEAR Phantom Gaming Edition," it is designed to work with ASRock Phantom Gaming series motherboards. Is that a marketing thing? Yeah, pretty much. I mean, these sticks of RAM will of course work with motherboards made by other manufacturers, such as ASUS, Gigabyte or MSI. If you are an ASRock fan, however, this RAM will be extra interesting to you. There are two types from which to choose -- sticks optimized for either AMD or Intel. You can then choose amongst various frequencies and capacities.

"GeIL memory has joined forces with leading motherboard brand, ASRock, and its top-of-the-line Phantom Gaming Alliance. Through this partnership, GeIL and ASRock dedicated to building a strong foundation for compatibility and reliability between DRAM and motherboard. The EVO SPEAR Phantom Gaming Edition Memory is tested under the strict criteria and validation of the ASRock Phantom Gaming series motherboards. As an excellent result of the cooperation, exceptional stability has benefited. It's available in frequencies from 2400MHz to 3200MHz, capacity for 4GB to 32GB kit, and runs as low as 1.2V and at max 1.35V," says GeIL.

The memory-maker further says, "As an influential member of the Phantom Gaming Alliance, the EVO SPEAR Phantom Gaming Edition Memory meant to let the visual elements of the modules become one for defining values of the co-branding. The module is built with a ten layer PCB and wrapped by a stealthy black aluminum heat spreader to deliver outstanding signal integrity and heat dissipation for gamers and enthusiasts who require better thermal conductivity for the small form factor systems (SFF). The EVO SPEAR Phantom Gaming Edition Memory offers a better choice for a cost-efficient upgrade, the exceptional gaming experience, video editing, and 3D animation rendering." 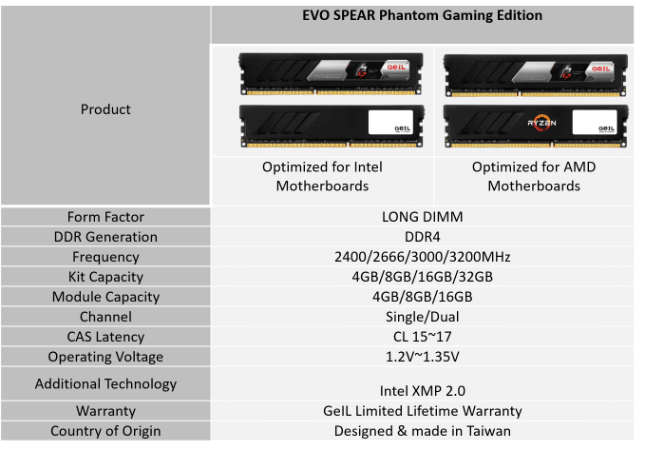 The GeIL EVO SPEAR Phantom Gaming Edition RAM can here from Newegg immediately. Pricing starts at just $67.99. Only certain kits are available at this time, although more should show up on Newegg soon.