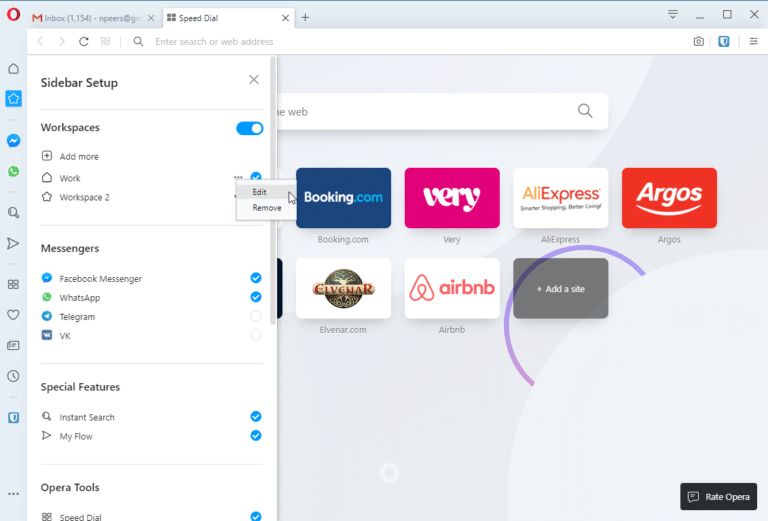 The headline feature is the introduction of workspaces to help users keep their browser tidy and organized. This is accompanied by the addition of a new Sidebar Setup panel, plus two new tab management tools.

Workspaces -- of which two are created by default -- allow users to organize tabs into groups around any criteria they wish, from simple 'work' and 'personal' to more granular choices such as 'Holiday' or 'Social Media'. It’s basically a way to compartmentalize browsing, although unlike Firefox’s Multi-Account Containers add-in, cookies aren’t isolated between workspaces, so you can’t sign into different accounts on the same website through different workspaces.

Each workspace exists with its own icon at the top of the Opera sidebar and switching is as simple as clicking on the appropriate icon. Workspaces can be managed directly from the sidebar via the new Sidebar setup panel: click … at the bottom to bring it up, then click 'Add more' to add additional workspaces or click … next to a workspace to edit or remove it. Editing it currently brings up a choice of 12 icons, plus the option of renaming it.

Workspaces can also be temporarily hidden -- click the tick mark followed by Hide to do so; bring it back from the same spot. Other sidebar elements can be hidden and reshown from here, while the panel also provides shortcuts to other useful areas -- Opera Tools provides easy access to History, Bookmarks and Extensions for example.

R2020 also introduces support for adding extensions to the sidebar rather than the main toolbar -- click 'Add more' under Sidebar Extensions to do so.

Workspaces offers one way to keep tabs more neatly organized, but Opera R2020 goes further with a couple of other new features too. First, if duplicate tabs have been opened within the same workspace, Opera will highlight the fact when the cursor rolls over one tab, making it easy to identify -- and close -- the redundant one.

A new visual tab cycler has also been introduced -- access it via the Ctrl + Tab keyboard shortcut. It looks and works in a similar way to the Windows Alt + Tab switcher tool.

Other new features include support for DNS over HTTPS for greater security and privacy (set this up via Settings – type 'dns' into the Search box to quickly access it). Unlike Firefox, users can switch between Cloudflare, Google Public DNS or their own custom DNS server.

The video pop-out feature has also been improved to allow users to make it a floating, resizable window that stays on top of other windows.

A complete list of changes in Opera 67 from its pre-releases to the first stable release today can be found at the changelog.