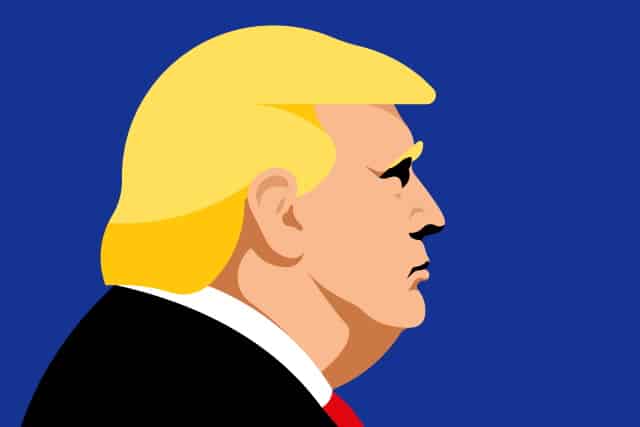 Donald Trump has lashed out at Twitter, accusing the site of not only interfering in the 2020 presidential elections, but also of standing in the way of free speech.

The accusations came after the site added a fact-checking link to a tweet Trump posted suggesting that mail-in ballots in California would be "substantially fraudulent". Twitter added a "Get the facts about mail-in ballots" to a pair of his tweets, causing the president to react angrily. The site, did not, however, censor or delete the tweets.

Making reference to postal voting in California, Trump tweeted: "There is NO WAY (ZERO!) that Mail-In Ballots will be anything less than substantially fraudulent. Mail boxes will be robbed, ballots will be forged & even illegally printed out & fraudulently signed." In a second tweet he said: "This will be a Rigged Election."

....living in the state, no matter who they are or how they got there, will get one. That will be followed up with professionals telling all of these people, many of whom have never even thought of voting before, how, and for whom, to vote. This will be a Rigged Election. No way!

Beneath both of these tweets, Twitter added a link inviting users to "Get the facts about mail-in ballots": 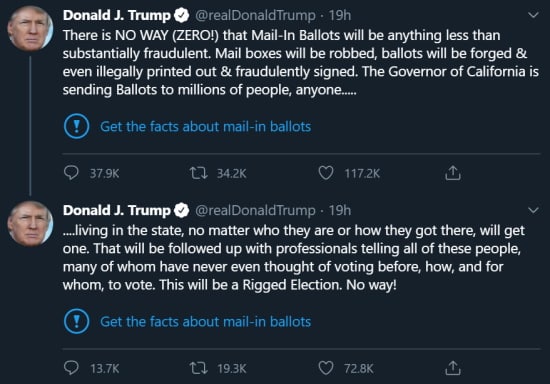 The links provided access to other stories about the story as well as a fact-check box which reads:

On Tuesday, President Trump made a series of claims about potential voter fraud after California Governor Gavin Newsom announced an effort to expand mail-in voting in California during the COVID-19 pandemic. These claims are unsubstantiated, according to CNN, Washington Post and others. Experts say mail-in ballots are very rarely linked to voter fraud.

In addition to this, there are tweets and links to stories about the issue, as well as a "What you need to know" panel:

- Trump falsely claimed that California will send mail-in ballots to "anyone living in the state, no matter who they are or how they got there." In fact, only registered voters will receive ballots.

- Five states already vote entirely by mail and all states offer some form of mail-in absentee voting, according to NBC News.

It did not take long for the president to react to the addition of a fact-checking link to his tweets, accusing Twitter of interfering in the 2020 election.

....Twitter is completely stifling FREE SPEECH, and I, as President, will not allow it to happen!

He also tweeted various articles from right-leaning sites that shared his anger about the fact-checking links.