Future Windows 10 builds to be served up based on quality, not frequency

Windows Insiders currently have a choice of three test rings -- Fast, Slow, and Release Preview. The Fast ring sees the most releases -- typically one new build a week -- and these tend to be the least stable. Slow ring flights come out much less often, and are more reliable and less buggy. Release Preview is for those who want early access to servicing updates on released versions of Windows 10.

That’s how it’s been for years, but now Microsoft is gearing up to make a big change that focuses on the quality angle of builds and better supports parallel coding efforts.

Given that each Windows update -- both big and small -- seems to introduce more problems for users, any focus on quality has to be a good thing, but in this instance it’s really more about making it clearer who the different build releases are for: Insiders can now choose a 'channel' that represents the quality they are comfortable with, and the existing rings will undergo a name change.

This change will come into effect later this month.

Microsoft explains who each of the channels is for:

Ideal for highly technical users. Insiders in the Dev Channel will receive builds that is earliest in a development cycle and will contain the latest work-in-progress code from our engineers. These builds will have rough edges and some instability that could block key activities or require workarounds.

These builds are not matched to a specific Windows 10 release. New features and OS improvements in this channel will show up in future Windows 10 releases when they’re ready and may be delivered as full OS build updates or servicing releases. Insider feedback here will help our engineers with major fixes and changes to the latest code.

Ideal for early adopters. Insiders and IT Professionals in the Beta Channel can check out upcoming Windows 10 features, while still getting relatively reliable updates that are validated by Microsoft.

As a part of the Beta Channel, Insiders will see builds that will be tied to a specific upcoming release, like 20H1 previously. Your feedback will be especially important here, since it will help our engineers make sure that key issues are identified and fixed before a major release.

Insiders and IT Professionals in the Release Preview Channel will have access to the upcoming release of Windows 10 prior to it being released to the world, with advanced quality updates and certain key features. These builds are supported by Microsoft. The Release Preview Channel is where we recommend companies preview and validate upcoming Windows 10 releases before broad deployment within their organization. 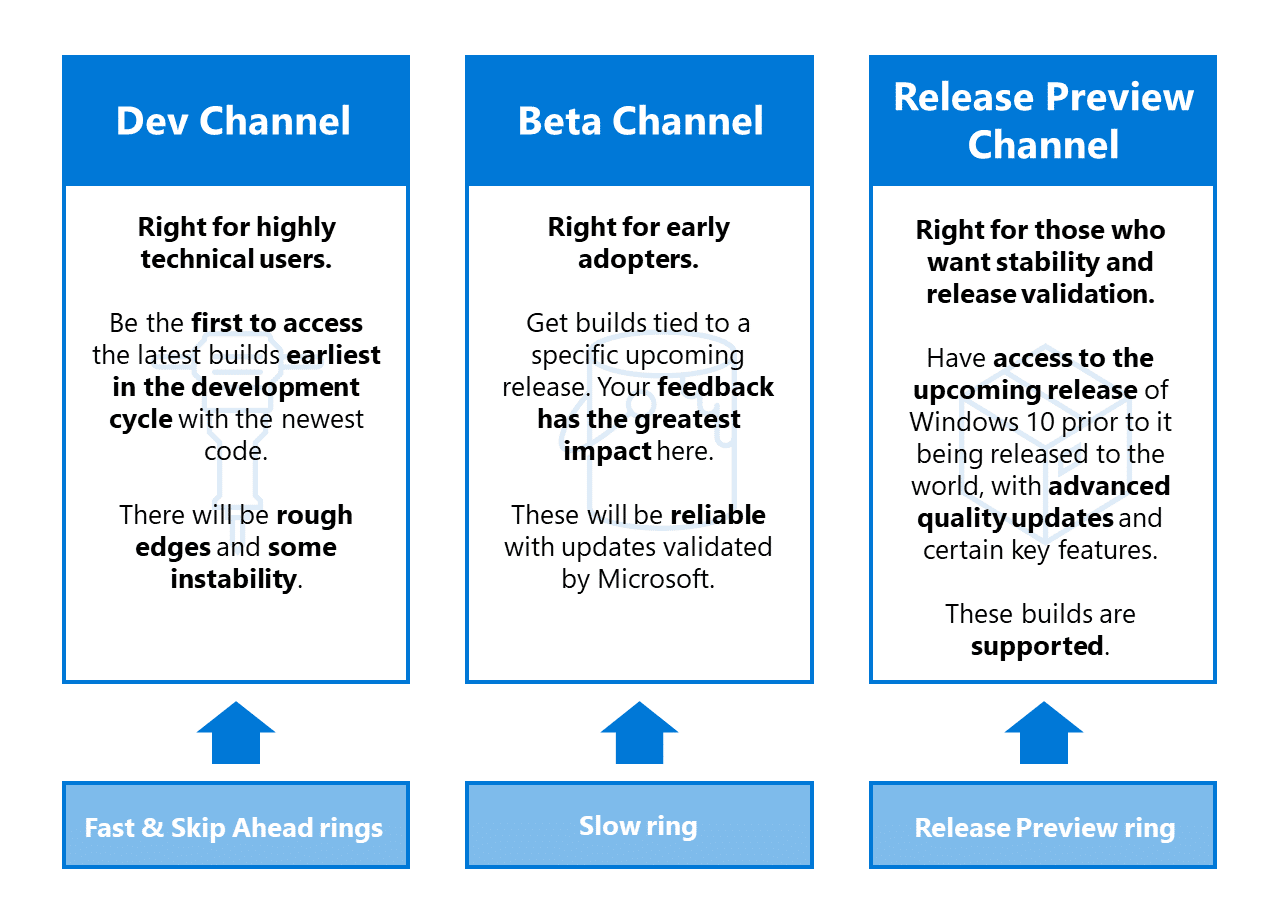 That's it for now, but Microsoft does say it may introduce additional channels for Insiders in the future.

Testers will be switched automatically from their current ring to the equivalent channel when the change comes into effect, and can adjust their channel choice at any time by going to Settings > Update & Security > Windows Insider Program.

The switch to Channels isn’t unique to Windows 10. Microsoft will also be applying the change to Windows and Office programs and to Microsoft Edge and Microsoft Teams in the near future.

13 Responses to Future Windows 10 builds to be served up based on quality, not frequency