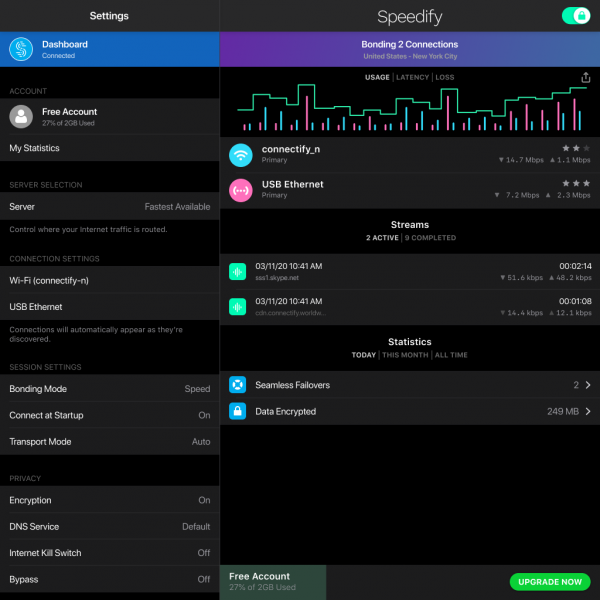 The increase in remote and home working in recent months has shone a spotlight on the unreliability of many domestic internet connections.

The Speedify VPN service is updating its offering which allows users to link and seamlessly switch between multiple connections including home internet, mobile data and public Wi-Fi networks to provide a more reliable connection.

"The pandemic has reshaped our expectations for internet access," says Alex Gizis, CEO of parent company Connectify. "People are hosting video calls, live streaming, and playing online games like never before to digitally engage with the world. However, despite how essential the internet is to our daily lives, connectivity technologies are failing users in critical moments. Speedify 10 is the remedy, because it lets users bond all of their available connections for increased performance as well as transition seamlessly between them without missing a beat."

Speedify 10 stabilizes internet connections by ensuring failover between Wi-Fi and mobile internet without dropping a data stream or disconnecting a user in their networks' dead zones. Regardless of which network is being utilized at a given moment encryption provides increased security and privacy for all user data flowing through the VPN tunnel.

Until June 30 Speedify is available with a 70 percent saving on the cost of a three-year plan. The app is available for download on iOS, Android, macOS, Windows and Linux.

You can see a video of Speedify in action below.