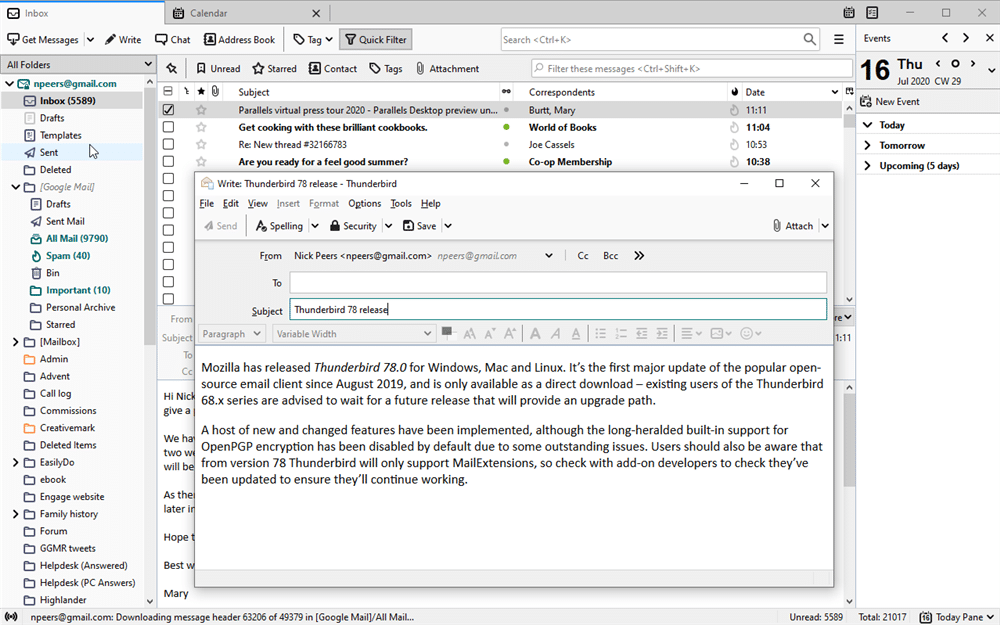 Mozilla has released Thunderbird 78.0 for Windows, Mac and Linux. It’s the first major update of the popular open-source email client since August 2019, and is only available as a direct download -- existing users of the Thunderbird 68.x series are advised to wait for a future release that will provide an upgrade path.

A host of new and changed features have been implemented, although the long-heralded built-in support for OpenPGP encryption has been disabled by default for now due to some outstanding issues.

Users should also be aware that from version 78 Thunderbird will only support MailExtensions, so check with add-on developers to check they’ve been updated to ensure they’ll continue working.

The new release opens with a brand-new Account Hub, a central portal for setting up accounts. This is accompanied by a redesigned Account Settings section, which resides on its own tab and like other aspects of Thunderbird, has been redesigned along similar lines to Firefox's recent updates.

The main Inbox interface has gained several improvements. First, users can now select messages via a series of selection boxes rather than the traditional Ctrl-click method -- the column is hidden by default, but accessible via the 'Select columns to display' dropdown menu. It’s accompanied by a new Delete action column in the thread pane.

The recipient address fields have also been redesigned. Now there are individual single-line input boxes for To, CC and BCC addresses, with each line now capable of handling multiple addresses. More improvements are expected to follow.

Elsewhere, users gain the ability to preview themes via the Add-On Manager, there’s an event preview added to the ICS import dialog and Windows users can finally minimize Thunderbird to the tray via the 'When Thunderbird is minimized, move it to the tray' option under Options > General.

Notable changes include a complete redesign of the Thunderbird Options/Preferences dialog, which mirrors the Account Settings section in being given its own tab and following Firefox's UI changes.

Elsewhere, scalable icons should ensure Thunderbird looks better on HiDPI monitors and in Dark mode, while users must supply their OS account password before being able to view saved passwords within the program.

The Lightning calendar, previously available as an add-on, has now been fully incorporated into Thunderbird itself. This follows the aforementioned switch to MailExtension-only add-on support.