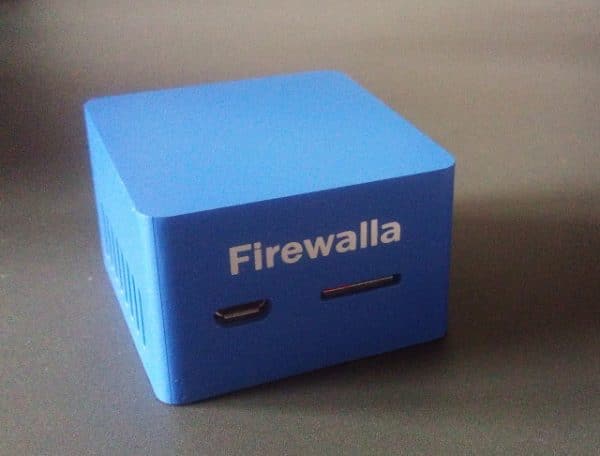 The current shift towards remote working has shone a spotlight on the security of home networks and the potential risk they present to corporate information.

While there are various software options you can employ to offer more protection, Firewalla has a different solution in the form of a tiny box that you plug into your router.

And when we say tiny we really mean it, it's just four centimeters square and three deep. On the front there's a micro-USB socket and a micro-SD card slot, on the back a standard USB and an Ethernet port. 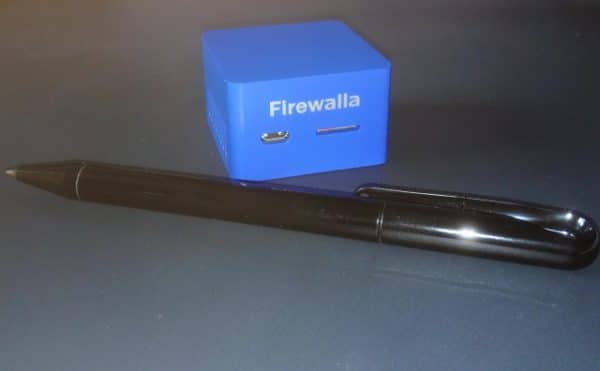 It comes in two versions, Red (which is red) designed for home use and internet speeds up to 100Mbps, and Blue (you guessed it!) which is aimed at heavier users and speeds up to 500Mbps. Blue also offers country level blocking and site-to-site VPN capability. Inside is a quad-core ARM CPU (32-bit in the Red, 64-bit in the Blue) and either 512 or 1024MB of memory.

So, how does it work? You install the Firewalla app on your phone or tablet then plug the box into an Ethernet port on your router and connect it to a USB power source -- there's a mains adapter included with the device -- give it a few minutes to start up and update, then link it to the app by scanning the QR code on the Firewalla's base and you’re good to go.

Once up and running all network traffic is virtually diverted via the Firewalla box so that it can monitor what's happening and report back to the app. It should work via a simple plug-and-play process but for routers that won't support that there's a DHCP mode that will require some tweaking of the router settings.

Alerts can be customized so you're not overwhelmed with messages. There's a VPN feature on the Blue which lets you connect to your home network remotely and use it as a private VPN server -- so if you're working or holidaying overseas for example you can access the web as if you were at home, getting round geographical blocks on services. You may need to tweak your router's port forwarding settings to get it to work though.

What Firewalla also does is to monitor network traffic and show you your uploads and downloads through the day. You can drill down into this information for each device, allowing you to see what's hogging your bandwidth or if any IoT devices are coming to life and going online at odd times. 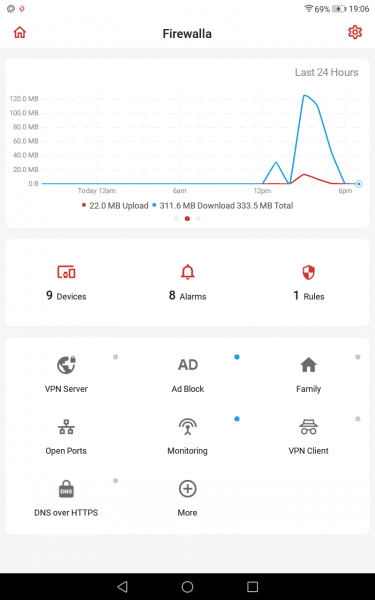 If you want quick fix network protection Firewalla is easy to set up and blocks the most severe attacks straight out of the box with no noticeable effect on performance. Other features are turned on and off via the app, so for the most part you don't need to be a security whizkid to use it. Some functions do require a deeper dive into the settings, but there's plenty of help available on the Firewalla website if you need it. The ad blocker is fairly basic and it often leaves spaces or captions where ads would have been so it's probably not going to replace your software solution. The biggest problem we found is that the app does put a quite heavy drain on your phone's battery.

Firewalla red costs $109, Blue is $179 which isn't cheap, but it's a one-off payment -- there are no ongoing subscription charges to maintain your protection as with some other security products. There's also a Gold (no, it's black) version launching soon and available to pre-order for $499 which is aimed more at business use and supports speeds up to 3Gbps along with sophisticated features like network segmentation.

See the Firewalla site for more information and to buy any of the versions.