We must blame Apple for China

Charles Duhigg and David Barboza’s recent New York Times article, "iEconomy: Human Costs Are Built Into an iPad", has created quite a firestorm. The article is a blistering expose of Apple and its Chinese manufacturing partners. For those that haven’t read it, please do. This is important, necessary journalism.

Apple apologists are quick to defend the company's behavior as "Me too". Critics call for boycotting Apple products. Holding Apple accountable is the right thing to do for all tech companies. We must see the apologist arguments for what they are -- fallacies that disempower us from action -- and hold up Apple as standard-bearer reformer for all Western technology manufacturing in China. 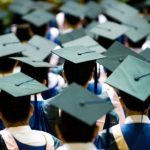 I'm a second year doctoral student, and I've got some concern about something I heard today that I want to share with any forward-thinking university president, but also with you.

Many schools will be looking at a new e-textbook platform from Apple that will have long-lasting impact on curriculum, students, teaching and cost of education.

If you're a teacher, you're nuts not to use Google+ 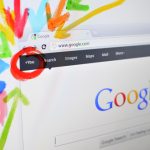 This week I gave a talk on Web 2.0 and teaching to a group of higher-education faculty ("cloud" isn't yet pervasive in academia). I won't bore you with the details, but I made the basic argument that using cloud-based tools could help educators create better learning environments for their students through the collaboration, mobility and engagement opportunities the cloud affords. I gave examples of several different tools that could help do this, like collaborative documents, mobile video broadcasting, and group citation indexes. Then I ended with what they all really wanted to talk about: social media.

In addition to being the hottest iteration of cloud computing to the general public, social media holds much potential for education. Social media allows for effortless individual and collective communication between teacher and student(s). It breaks down the walls of the traditional classroom, allowing for conversation and active learning to exist 24/7, in real time and asynchronously, right in the palm of a student's hand.

In defense of netbooks 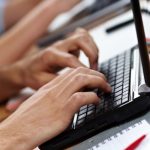 This morning, Gizmodo’s Brian Barret posted "Remember Netbooks? No One Else Does, Either" In the post, Barret cites recent data from ABI Research that indicates the rise of tablet computers at the expense of netbooks: "Media tablet shipments surpassed netbook shipments this quarter, reaching 13.6 million units, compared to just 7.3 million netbooks. Netbooks had previously led the way with 8.4 million shipments in 1Q11, compared to just 6.4 million media tablets".

Barret takes this research as an opportunity to gleefully dance on the grave of the netbook computer, stating that it is now "very hard to find a compelling argument as to why you'd prefer one [a netbook] over a tablet". I disagree. 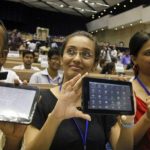 Anyone with even a mild interest in technology knows that the iPhone 4S launched one week ago today. In what has now become a ritualistic media event, the new iPhone launch was covered in scrupulous detail, from pre-launch sales predictions, to pundit reviews, to interviews with Apple fans waiting in line to get their hands on the newest iProduct. Someone even made a website devoted to funny things Apple’s new voice command application, Siri, says. The hype tumbled into this week when people awoke Monday morning to find their RSS feeds ablaze with news that Apple had already sold 4 million iPhone 4Ses. Yesterday, AT&T said it had activated 1M iPhone 4Ses so far. iPhone 4S distribution expanded to 22 more countries -- that's 29 in all -- today. Indeed, it feels like everyone in the world has iPhone on the mind.

Well, maybe not everyone. Actually, not even close to everyone. Most everyone, in fact, did not hear about the new iPhone launch or, if they did, they don’t care. Most of the world’s population has more pressing things to focus on than Siri's pithy answer to the meaning of life. Things like staying fed. Finding shelter. Mitigating the scourge of dire poverty and lack of opportunity for a better life. For many more billions, other recent technologies or innovations matter more than iPhone 4S.

Higher Ed should get over its love affair with iPad 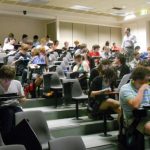 It's no secret iPad owners love their devices. The American Customer Satisfaction Index and NPD both report unusually high satisfaction rates for iPad. Just in second quarter, Apple sold more than 9 million tablets, generating $6 billion in revenue. Despite the best efforts of competitors, most of which offer tablets running Android OS, nothing has yet put a dent in iPad’s dominance among consumers. The fact of the matter is that, if you own a tablet right now, it most likely is iPad.

There’s  another group equally smitten by iPad: higher education. I’m not talking about students, faculty or university administrators that own the tablets (I would lump these people in with the consumer category), but rather the growing number of  higher-ed institutions around the country that currently issue iPads to their students.

What the passing of Steve Jobs says about us 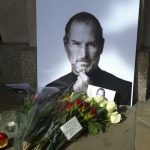 "Suit the action to the word, the word to the action, with this special observance, that you o'erstep not the modesty of nature: for any thing so o'erdone is from the purpose of playing, whose end, both at the first and now, was and is, to hold as 'twere the mirror up to nature: to show virtue her feature, scorn her own image, and the very age and body of the time his form and pressure". -- Hamlet Act 3, scene 2, 17–24

One thing that struck me about the passing of Steve Jobs is the level of emotion so many people feel. The outpouring of support and genuine sense of loss for a person that most people never met reminds me a bit of when Princess Diana died tragically. The emotion expressed over Diana’s passing was easy for me to understand. Diana was a state sanctioned celebrity, a real life embodiment of the fairy tales those in Western society grow up on. That coupled with her beauty and grace and life touched by scandal made it understandable why people would feel some kind of personal connection to her. The heroine from their fairy tales had been tragically taken away.