In defense of netbooks 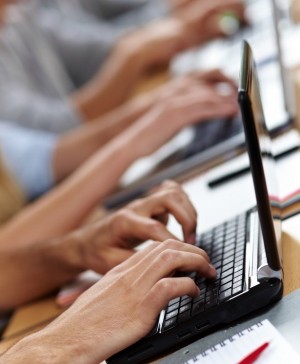 This morning, Gizmodo’s Brian Barret posted "Remember Netbooks? No One Else Does, Either" In the post, Barret cites recent data from ABI Research that indicates the rise of tablet computers at the expense of netbooks: "Media tablet shipments surpassed netbook shipments this quarter, reaching 13.6 million units, compared to just 7.3 million netbooks. Netbooks had previously led the way with 8.4 million shipments in 1Q11, compared to just 6.4 million media tablets".

Barret takes this research as an opportunity to gleefully dance on the grave of the netbook computer, stating that it is now "very hard to find a compelling argument as to why you'd prefer one [a netbook] over a tablet". I disagree.

I Speak from Experience

Part of my work in higher education has involved implementing a program that puts clinical students out into rural areas for extended periods of time. Getting students involved in rural healthcare early increases the likelihood they may return to rural areas to practice in the future. There is a severe shortage of rural clinicians in America, something this program aims to help remedy.

Netbooks have played an integral role in the implementation of this rural clinical education program. Using inexpensive netbooks and 3G data modems, we’ve successfully implemented a program that allows students to "bring their classroom with them". Students interact with their curriculum both asynchronously and synchronously via real-time group interactions in a browser-based virtual meeting room.

Students discuss clinical experiences, prepare lessons for their spatially dispersed peers and share presentations with one another as part of their curriculum. All interactions are done using the netbooks' webcams and mics for VOIP, enabling students in highly remote locations (some are even categorized as "frontier" by the federal government) to connect with one another, decreasing the feelings of isolation inherent to rural clinical education and practice.

We’ve actually tested tablets in this program, being exited by the increased portability they provide over netbooks. Yet, based on actual experience, we’ve found tablets aren't as effective as netbooks in terms of both productivity and cost. We need students to create content in this program more than consume it, something we found challenging with tablets. It was simply more difficult to get "real work" done on a tablet as compared to a netbook. The slight loss in portability by going with a netbook just wasn't worth the significant loss in productivity realized by going with a tablet.

By far, lower cost is the netbook's important advantage. Like most education funding these days, our budget is small and so "bang for the buck" is important. For approximately $300, we can send students into the field with a computer running Windows XP or 7, full Office ("free" through institutional licence), a built-in keyboard, webcam, mic, USB ports, (which we use to connect the 3G data modem), VGA outs and an SD card slot. No tablet can touch that. The netbooks also have proven durable, with some models 3 years old and still going strong. Moving forward, we would still choose netbooks over tablets, even if cost wasn't an issue.

Netbook deployments like this one in education, both K-12 and secondary, are not rare. A Google search of "netbooks in the classroom" will display many different programs that utilize netbooks in the education setting (Readers, please feel free to add your programs to the comments). Editor's note: Daughter's high school uses netbooks in some classes.

Of course, tablet deployments in education aren't exactly rare either. Many schools are experimenting with tablets for some of the same reasons that others are using netbooks.

Yet I still think that, if cost is an issue and content production is more important to the educational program than content consumption, netbooks provide a far greater "bang for the buck" than a tablet. They might not be as "cool" but, then again, that shouldn't really be the point.

Outside of education, netbooks also have value to those with limited means that need a cheap, fully functional computer. Indeed, many regular laptops are cheap enough now, though (a far bigger factor, in my opinion, than tablets in the decreasing sales of netbooks), but lower-cost notebooks are not as portable as a netbook. They typically are more expensive, even if not by much. Additionally, netbooks have application in the developing world, something I wrote about last week. Regardless, for someone that wants a cheap, full fledged computer -- that is, a device capable of functionality traditionally associated with computers running desktop OSes like Windows -- a netbook is the way to go.

It is this distinction that Barret and others cheering the fall of the netbook miss. The numbers from ABI show the consumer popularity for a highly portable device shifting from one form factor (netbooks) to another (tablets). But to proclaim the netbook dead is short sighted. Tablets and netbooks are different categories of devices. Tablets run beefed up mobile OSes similar to smartphones.

Netbooks are stripped down laptops that function in the same vein as traditional desktop computers. In short, netbook does not equal tablet, and vice versa. While their utilities overlap in terms of potability, they diverge in many other respects. You wouldn't say your smartphone is the same as your laptop or tablet, so why call a tablet the same as a netbook?

I think the netbook's day in the sun as the go to portable device for the mass market is over, with tablets filling the void. Yet the swap is not zero sum. Netbooks will persist, though likely in a decreased capacity. Education institutions seeking to find cheap ways to get full-fledged computers into the hands of students, or low-income consumers in both the United States and abroad looking for an inexpensive computer that has high portability, can still appreciate netbooks. There remains a place for the netbook.

Before we dance on the grave of netbooks, let’s remember that the form factor provides continued value for segments of the population outside of mainstream consumers and tech bloggers. As tablets rise, netbooks may indeed become more of a niche device, but I sincerely hope they never go away. And, unlike Mr. Barret, I hope you don't either.

20 Responses to In defense of netbooks