As urgent appeals for lawmakers to finally address multiple defects in US patent law appear to finally be taken seriously, the US Patent and Trademark Office is considering riding this wave of upheaval and making a tremendous change of its own: Last week, it announced its official support of a Web site whose purpose will be to encourage citizens to assess the validity of patent applications for themselves, and issue challenges where necessary.

The goal is to expedite the discovery of "prior art" - creations that existed before the applicant for a patent claimed he invented them. If successful, the Peer-to-Patent Web site could become a kind of SourceForge for intellectual property integrity.

The foundation of the Peer-to-Patent community has already been formed, through the work of New York Law School Professor Beth Simone Noveck. Last November, Prof. Noveck's Institute for Information Law and Policy formed an advisory board for the formation of a Community Patent Review project.

In testimony before the Vermont state legislature last April, Prof. Noveck spelled out the goals of this project, and how it might benefit the Internet as a whole.

"Up to now, [the Internet] has produced mainly new marketplaces in which individuals and established companies engage in transient transactions," she stated. "More recently, groups of people have come together to collaborate on a more sustained basis, to create encyclopedias and software and other valuable things. In most cases, however, these collaborations are undertaken for purely altruistic reasons." 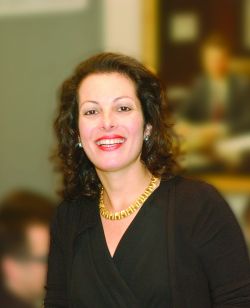 "I believe there is a major gap in this picture," she continued. "We need to make it easier for people to come together to form companies (firms, rather than just markets) that can provide economic incentives for sustained work by dispersed individuals, that can collectively own the jointly produced work product (whether that is a valuable piece of intellectual property or a new branded service created by the participants), that can enjoy limited liability (thereby avoiding being re-characterized as partnerships) and that can open a bank account, distribute net proceeds to the participants who have contributed value, and enter into contracts with third parties."

So while Peer-to-Patent could be viewed as a way for citizens to challenge patent applications, Noveck sees it as a Wikipedia-like system for fostering the creation of an intellectual property framework that both citizens and corporations could live with. There's an ideal behind this idea: building IP portfolios with the intent of creating products, rather than defending against others trying to do the same.

Noveck's efforts are backed by an interesting assortment of companies, including Microsoft, Red Hat, IBM, HP, CA, and General Electric.

As a paper produced last month by the Information Technology and Innovation Foundation - reviewed by both the USPTO and US lawmakers - makes clear, it was probably the Research in Motion settlement with portfolio manager NTP that broke the proverbial camel's back.

"As the RIM case and countless others illustrate, the PTO has issued too many poor quality patents," the ITIF's Julie Hedlund writes. "Lack of sufficient PTO resources has contributed to patent examiners granting questionable patents that are overly broad and overlap with existing patents. Examiners have no more time to review patent applications than they had in the 1970s, even though the technology being patented is much more complex."

Here's how the system will work: Patent applications will be published online (as many already have been for some time). Individuals will be invited to serve as reviewers, and to submit cases for prior art that may serve as recommendations for the applications' rejection.

But the Peer-to-Patent community will see these recommendations, grading them according to their assessments of the quality of their cases. Only the top 10 scoring recommendations will be forwarded to the patent examiner, who is under no restrictions regarding how he treats any or all of them - he simply treats them as expert opinions.

What isn't clear yet is whether "experts" will be allowed to weigh in on the validity of a patent claim - in other words, recommending it be approved instead. Without such a balancing system in place, patent examiners may perhaps be guaranteed of always receiving ten rejection recommendations...and therefore may give each successive batch of ten lesser and lesser credence.

The open source community upon which Prof. Novack's system is modeled has demonstrated throughout its history a distaste at least, or a furious disrespect at most, for the patent system in general. Surprisingly, she may be counting on that.

In a presentation earlier this year before the European Patent Conference, which is studying ways to unify patent laws among member states there, Prof. Novack specifically singled out segments of the Internet community with "Desire to weaken a patent by finding prior art to narrow its claims or defeat the patent" and simply "Dislike of software patents" as among the groups she's counting upon to participate. In addition, she included those with "Desire to strengthen a patent by finding prior art to hone the claims." However, some might argue that those claims would be honed better if one did not find prior art.

Details for how individuals may apply to become patent review experts were provided by the USPTO (PDF available here).

18 Responses to US Patent Office to Try 'Open Source' Approach