Craig Mundie: The future of the PC is 'a room' 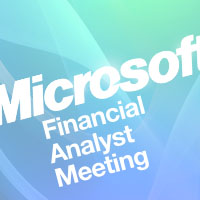 Craig Mundie, Microsoft's chief research & strategy officer, is charged with anticipating the future and the computing technologies people will need in the future. Early this afternoon, during Microsoft's annual Financial Analyst Meeting, Mundie spoke about the importance of natural user interfaces. He described one user interface I would never have imagined -- or perhaps you won't.

The successor to the PC is "a room," Mundie told FAM attendees. Apparently, Microsoft's big-ass Surface computer is even too small for Microsoft's vision leader. He demoed the room, too. Mundie described his desktop as a Surface computer, but the real user interface was the wall.

I describe the room like this: A cubicle with living post-it notes and pinned-up papers -- meaning real time and digital. I suppose it's clutter turned off with a switch, if you wanted to use the room as a, well, room.

Oh, yes, and there's a resident digital assistant. He reminded me of a modernized, stylized and handsomer version of Max Headroom. Craig asked the assistant about the day's appointments -- postponing one -- among other questions.

Another way to describe the room, which responds to the person, is that house in Syfy series Eureka. The one with the sultry voice and fussy character.

I had been thinking that computers would get smaller, not larger. My smartphone and laptop are plenty of computers for me. But a room?

2 Responses to Craig Mundie: The future of the PC is 'a room'