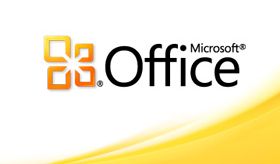 Participants in the first Technical Preview for Microsoft Office 2010 received invitations this morning to join the Office 2010 technical beta build 4536.1000. Not long afterward, the link to the technical beta went live on MSDN and TechNet.

Ironically, once again, attendees at Microsoft's own PDC 2009 conference were the last to know about it, unless they were checking their own e-mail. The first hint that something was up came up during an unrelated demo during Day 0 of the conference. At the bottom of a screen where taskbar demos were being shown, the new icons for the Office 2010 apps showed up. Now, it appears all Office apps will be represented by their initials, not just Word.

In the new artwork package this year, we're noticing that the Office logo not only gets a tweak (arrows pointing to the center of the various boxes) but a color scheme change. As Google commandeers more of Microsoft's four-color product logos, Microsoft itself has been signaling shape and design over color, especially with Exchange Server and SQL Server. Now Office gets an all-gold scheme -- gold used to be Outlook's color.

Technical Preview participants were not necessarily MSDN or TechNet members, so in actuality, the Technical Beta is being extended to two groups, the second of which are comprised of active contributors to the Preview program. Today's release may impact the anticipated schedule of the keynotes somewhat, which originally had been spread out over two days. We had anticipated the Office beta launch Wednesday.

We'll dive into the download tonight and let you know what we find.