Windows 7 did little to slow the Mac's sales trajectory during fourth quarter, according to NPD. Year over year, Apple doubled US retail unit share -- from 5 percent to 10 percent -- for PCs selling between $500 and $1,000. More startling, Apple increased its unit share from 79 percent to 90 percent in the market for "premium" PCs, meaning those selling for more than $1,000. In July, I reported that Apple's revenue share for PCs selling for more than $1,000 was 91 percent, because of higher average selling prices; nearly all Macs sold for more than $1,000. Now Apple benefits from 90-percent unit share, too.

Before any blogger or journalist links to this post, let me be clear: NPD did not issue a report, as some linkers are sure to write. I asked Stephen Baker, NPD's vice president of industry analysis, for the numbers. Please don't attribute them to a NPD report. I asked because of yesterday's Wall Street Journal story: "Windows 7 Fails to Boost Profits of PC Makers." I wanted a look at the numbers, so I asked Baker for Mac and Windows retail average selling prices and Mac retail market share.

The data is startling confirmation -- at least for the United States -- about Apple's success establishing the Mac as a premium brand. More significantly, the data shows how discounting has lowered consumer expectations about Windows PCs and brand equity for companies like Dell or HP. Additionally, gains below $1,000 indicate there is demand for lower-priced Macs, which during 2009 Apple satisfied with the $999 white MacBook and $599 Mac mini.

But there's also a warning for Apple, too. "They continue to gain share in those segments, but almost all the growth was in under $500 computers, where they don't play," Baker told me today. "So at some point they are clearly going to run out of headroom in $1,000-plus, and in the $500-$1,000 segment they are still pretty small. And, of course, if selling prices continue on this path, the 'premium' segment is going to be over $500 not over $1,000."

Fourth-quarter ASPs tell the story. The average selling price for Windows PCs (desktops and notebooks combined) was $475, down from $589 a year earlier, according to NPD. Mac ASP: $1,361, down from $1,499. Windows PC prices fell organically, while Mac ASPs dropped mainly because during second half of 2009 Apple lowered prices at the high end of the pricing segment. 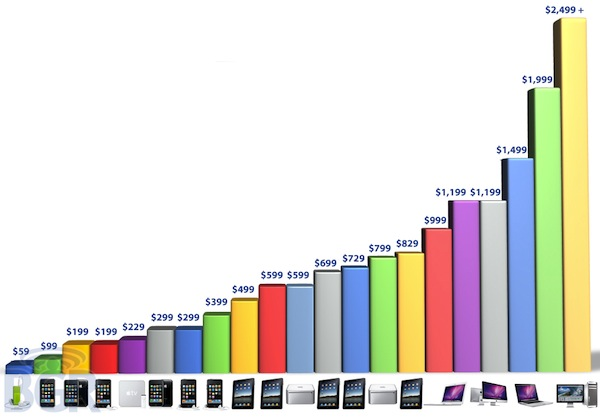 Betanews founder Nate Mook and I discussed the data over IM. He made several astute observations about Apple's "premium" success: "You grow slowly until you hit the tipping point where you are big enough to lower prices. Suddenly being the 'premium' brand doesn't necessarily mean you're the most expensive. Yet you're still associated with being premium."

For now, as I explained in Friday post, "'Apple iPad was my idea'," there are no price cuts but an opening of price bands. I wrote: "iPad fills a gaping hole in the Mac product line between the aforementioned $399 and $999. Suddenly, the cheapest, functional Mac portable is $499, or half what it was on Monday. Consumers who wanted a Mac but couldn't afford one can get one for under 500 bucks." The day after, I posted about Apple covering all mobile computing price points from $99 to $2,499, Boy Genius Report put together a visual representation (see chart above).

Apple's iPad marketing emphasizes PC capabilities first, including Web browsing, e-mail and productivity functions using iWork. Then there are the seemingly bazillion third-party applications. With iPad, Apple has a sub-$500 PC for the mainstream market, lifted by the "premium" associated with wider-reaching brand.

On January 27, Baker blogged about iPad:

This should signal the death of the whole slate/pad/tablet concept, and now Apple has put a stake in the heart of that concept. However at $499, with its media directed functionality, it could make a play for the companion computing market the PC world discovered in 2009 with the netbook. And with unit volumes for notebooks and netbooks up 60 percent during the holiday season according to NPD's Retail Tracking Service, there is a huge unit opportunity for Apple that they have now chosen to attack.

The one question remains: Can Apple really be effective taking its premium brand success to the market below five hundred bucks? That's for iPad to answer, starting in about 60 days.