Before today, if you had asked, which mobile phone company is the one that intends to split itself into two pieces, you might have gotten the answer: Motorola. Today, Nokia is the company taking two directions, both of which are a little startling, and both of which appear uncertain.

First, it's made a decision to merge its open source mobile Linux project, maemo, into Intel's Moblin project, with the result being MeeGo -- a product that, at least at first glance, bears more resemblance to parent Intel than parent Nokia. Second, Symbian proponents are still awaiting word about a future Nokia phone, the N87, believed to be the launch pad for the now-fully-open-source Symbian^3 operating system. But they're waiting in the backseat, it would appear, as Windows Phone 7 Series and MeeGo get the lion's share of attention, on this first day of Mobile World Congress in Barcelona. 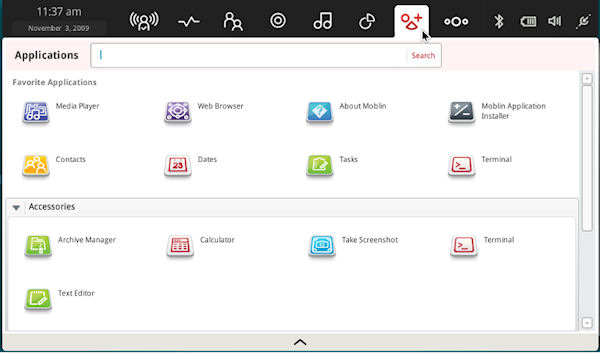 A late screenshot from Intel's Moblin Linux-based operating system, which was geared more toward Atom-based netbooks.

Intel Moblin was being developed as the mobile Linux system for Atom-based netbooks, with the strong backing of the Linux Foundation. Meanwhile, maemo (lower-case "m") was Nokia's project for ARM-based platforms, including TI's OMAP application platform. Not only were their environments different, but their focuses seemed different as well: Moblin was more metaphorical, capturing the spirit of the mobile desktop; while maemo tried to be more of a facilitator of mobile applications, especially those made with the cross-platform Qt development tool. 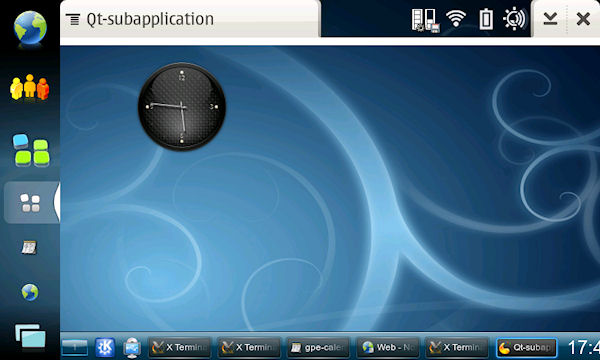 Nokia's maemo system was designed for ARM-based smartphones, although it extended the desktop metaphor used in Windows and Linux for PCs, complete with widgets like this example.

Although there are no early screenshots of MeeGo to go on at this point (perhaps some will pop up at MWC), it would appear from the art direction employed thus far (a sort of Henry-Moore-meets-Friz-Freleng theme) that Intel's look and feel may win out. However, comments released today in the video below suggest that one very important element of maemo development is being assimilated into Moblin whole: the use of Qt libraries, with which Moblin developers have historically had trouble. It's Qt which will let a developer write a mobile Web application for MeeGo that can also run in maemo, in Moblin (with a little help in the library department), and even in Symbian.

As of now, MeeGo's newly launched community Web site urges new developers to get started by downloading the Qt development platform for their respective PCs, and compiling the "Hello, World" test case app. That wasn't exactly the message community developers wanted to hear today; they're looking for clues from just about anywhere -- YouTube videos, gadget blogs, last year's analyst meetings -- as to what a MeeGo application is supposed to look like. While Nokia and Intel tout the merger of the two platforms, and thus the coming together of the two communities behind those platforms, all that members of those communities see today thus far are a bunch of executives shaking hands.

"You print-screen a simple QT-helloworld with no copy-paste-possibility (even without the full lines of code)," writes MeeGo community member ckpinguin this morning. "Are you so desperately looking for developers in order to push app-downloads?" And zeevik the fox writes, "Where is the example to show Meego power or benefits? What is new in Meego and what is the advantage over other platforms? Is this is the way to attract developers, with software code for an 11- year-old kid?"

While that bit of confusion is going on, the Symbian community awaits word on what some had hoped would be the pinnacle smartphone for the newest rendition of their operating system: the Nokia N87 for Symbian^3. Expectations have already been raised high for an incredible device featuring a 12-megapixel camera with Carl Zeiss optics capable of shooting 720p video.

But Nokia's Symbian^3-related announcement today was about as cerebral and invisible as the future UI of MeeGo. Although Nokia purchased the Symbian code last year with the intention of releasing it through the Symbian Foundation as a fully open source system, its proponents still expect Nokia to show some leadership in steering Symbian^3 development forward. Last December, Nokia promised a display of such leadership, which proponents assumed would come this week.

While this week is far from over, the bone that Nokia threw to Symbian proponents may be less than they expected: a preview of coming attractions video that frankly looks less convincing than Microsoft's preview of Windows Phone 7 earlier today, and a promise that Symbian^3 would be code-complete by the end of March.

That gives developers a six-month window to develop applications for this apparently completely revised platform, assuming Nokia sticks by plans to release some kind of Symbian^3-based device (no word yet as to which one) during Q3. Once again, the development platform of choice is Qt; and although Qt is well respected and firmly entrenched in the development community, there remains no clear instruction manual as to what developers should start doing besides "Hello, world."

So the early word from members of the Symbian community was, we're encouraged...kind of. "I realize this is a preview but it seems to address many of the UI frustrations that I am currently experiencing. However, many of these already exist in Android and the iPhone," wrote Mopedia this afternoon. "I guess we'll have to wait and see what new features Symbian will be bringing to the table."

One Response to Linux shakeout merges Maemo with Moblin, while Symbian^3 awaits its future