Warning! 3D TV can kill you 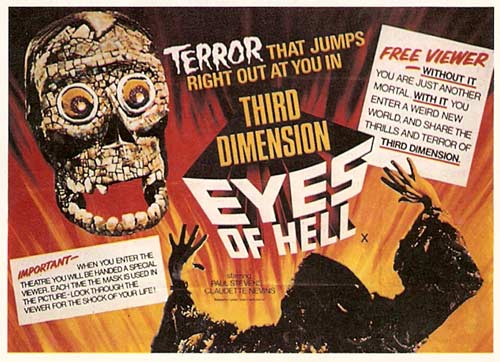 If you're like me, and you're among the dozen or so who still watch the nightly half-hour of American commercial broadcast TV news, you've probably noticed that about a quarter of that time is devoted to ads. Two-thirds of those ads are devoted to drugs, and half of those drug ads are devoted to warnings about the many gruesome, horrid ways in which you might unexpectedly die. The unspoken reason why these ads appear there in the first place is because advertisers reason that if you're still watching the Evening News, you must be afraid to touch your computer or your smartphone to read the real news from TMZ, which makes you (wait for it...) old. (Meaning, above 29.)

Samsung's Australian unit doesn't want the drug companies to have all the fun. Barely a month after releasing its 3D television offerings on an unsuspecting world, the company has published a warning on its Web site down under that outlines a list of risks so serious that those network news drug spots seem tame by comparison.

A new dimension of illness

If you're perfectly healthy and have a hankering to spend money on still-evolving technologies, stop reading here and head down to the electronics big box store immediately. What I'm about to say won't interest you because you clearly need to feel the shockwaves from the depths of James Cameron's aquamarine cinematographic soul whenever he sinks a ship or blows up a planet. If, however, you're bothered by the potential of getting seriously ill by simply watching television, you may want to hold off on signing up to become a 3D household. Because if any of the following applies to you, Samsung recommends against watching 3D TV:

Funny, I didn't see convulsions or loss of awareness in the first wave of ads for this technology. I guess they were hoping sleep-deprived drinkers who don't exercise would stay away from the 3D TV aisle.

This isn't the first time that a technology comes with some health-related caveats. Nothing in life, after all, is without risk. Emissions from cell phones have long been suspected of being related to certain forms of cancers. Excessive smartphone use can cause repetitive stress injuries (RSI) for thumb typists. Watching too much conventional television, or doing so in badly lit rooms, won't do wonders for your vision. Despite this, the Samsung warning breaks new ground in terms of relative risk and reward. That's some scary language to digest before sitting down with a bowl of fat-free-buttered popcorn, and it's way more than would fit into the average 30-second television spot.

Does the reward justify the risk?

So do you really want to see Avatar in your living room in 3D so badly that you'd risk seizures, convulsions, and loss of awareness? I can't decide for you, of course, but I'm voting no for myself for two reasons: A good HDTV signal is more than good enough for me, and I don't want to have to avoid open stairwells, or balconies every time I watch a movie.

When I first wrote about 3D TV last month, I lamented the lack of content, distribution, affordability, and relevance. I tagged it as a solution in search of a problem, and I advised readers to wait. A long time. This latest health scare only reinforces what I originally said, and galvanizes my belief that the industry is so focused on pushing next-generation technologies on often-unsuspecting consumers that it's willing to overlook the risks in the relentless pursuit of profit.

If Samsung and its fellow 3D TV vendors had any sense of right and wrong, they'd pull their products from the market until the health implications can be more thoroughly -- and independently -- validated. I believe, now as then, that anything that requires high-tech $250 glasses that act like virtual shutters in concert with the screen is way over the top for the average consumer. The impracticalities and costs associated with this kind of prematurely deployed technology were bad enough for the average consumer. The overt risks associated with the use of these still-expensive, still-cumbersome glasses merely sealed the deal. 3D simply won't fly until manufacturers can deliver the immersive effect without resorting to trick, health-damaging glasses. And any vendor that continues to sell these obviously interim solutions is putting the bottom line ahead of its customers.

I can accept that every technology carries a certain degree of risk. We always play the compromise game whenever we make the investment in any new gadget. But the risks with 3D seem to extend well beyond the usual aches and pains inherent in most modern devices. It's yet another sign (to me, anyway) that this is one technology that needs a few more years of baking before it's ready to be served.

Until then, if I want to be scared when I watch television, I'll simply watch the Evening News with Katie and wait for the inevitable drug ads to come on. And if I want to have a drink and hang out on my balcony, I'll be able to do that, too. Some things, like 3D TV, just aren't worth the risk, and should have been held back while manufacturers ironed out a clearly disturbing set of bugs.

Poster from the terrifying 3D movie "Eyes of Hell" from the historical Web site WidescreenMovies.org.

15 Responses to Warning! 3D TV can kill you