Apple and Microsoft will face off for June 24 retail showdown 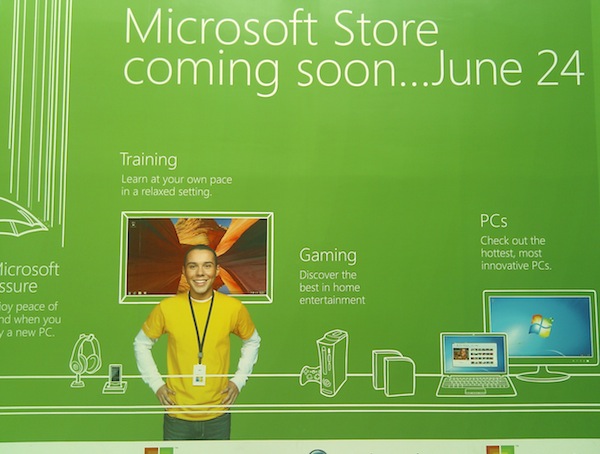 Guess what's coming to San Diego in two weeks? If you answered iPhone 4, congratulations for being right but not giving the right answer. Microsoft plans to open a new retail store on the same day (its second in California). The duo launches could be speculator competition and ground zero for fandom, should the "I'm a Mac" and "I'm a PC" crowds choose to rally for their camps. If the measure is the longest line on launch day, who will win?

In a rare lunchtime outing, today I hustled over to Fashion Valley Mall, where I was stunned to see the sign above. By the way, I snapped the photo using the Google Nexus One. What a lousy camera! Is the camera white balance-challenged or what? Nexus One muted the bright green, which I only partially revived through editing. Geez. Back on topic, yes, I was stunned -- by the date and by something else. The Microsoft Store is four shops down from the Apple Store. That's right four stores -- and a walkway between the middle two.

I can't imagine a stranger location because of the adjoining companion shops -- Juicy Couture and Louis Vuitton. Well, there goes the neighborhood, as they say. If I owned either store, I'd cringe about a bunch of geeks dressed in original Star Trek color-like T-Shirts moving in next door. (Why are there red shirts in the Microsoft Store universe? Red shirts were the most likely killed in the original Trek. Bad omen? Over confidence? Neither?) Seriously, Fashion Valley has been undergoing an upscale makeover, and I struggle to see how the Microsoft Store fits in with fashionista central.

Uh-oh, there is a SonyStyle store on the upper level. Nothing quite grates the ears like the sweet gnashing of a Microsoft partner's teeth -- when the company chooses to compete. Microsoft won't just be competing with Apple but loyal Sony (OK, so the company is selling Android phones and, soon, a Google TV-powered big screen).

Back to the Apple Store, the excitement will come June 24. Is it coincidence -- timing of the Microsoft Store San Diego's grand opening and iPhone 4's launch? Oh I don't think so. If someone at one of the companies didn't manipulate the dates, surely some cosmic force did. C`mon, there's polarized competition between these companies, and it's even more heated among the fans. You need go no further than Betanews comments to feel the enmity. Just four stores and a walkway/pavilion will separate Apple and Microsoft shops. Should there be long lines at both stores and mall management accidentally lets them mix -- BOOM! -- matter and antimatter will collide resulting in an enormous explosion. Bye, bye, San Diego.

Suddenly, I'm really looking forward to June 24. If there is any sense of competition in the universe, both CEO Steves would make special trips to San Diego. Imagine the media circus of Steve Ballmer opening the San Diego Microsoft Store and Steve Jobs greeting the first West Coast iPhone 4 buyers. Seriously guys, you should do just that. The news media loves conflict, and the two Steves would provide plenty, if only by their presence.

But my challenge is to the fans. If you love Apple or Microsoft, Fashion Valley should be your destination on June 24. You can be sure plenty of bloggers and journalists will show up just to count the number of people in line. It's a measure of support for one company and its products or the other. Shouldn't you be there?