Apple should NOT recall iPhone 4

Today's Business Insider headline "Suddenly, Everyone Is Talking About An iPhone 4 Recall!" is tabloid journalism gone too far. Dan Frommer aggregates quotes from blogs or news sites demanding an iPhone 4 recall. There's no counterpoint. I'll give one: I'm not asking for a recall, so it certainly isn't everyone. What about you? Do you demand an iPhone 4 recall? (Uh-oh, my colleague Ed Oswald posted about a recall being inevitable, too. For shame!)

In late June, I posted: "12 people share their iPhone 4 Death Grip stories." These dozen iPhone 4 owners told antenna/reception stories ranging from serious problems to none. As I expressed then: "The reception problems aren't as widespread as blogs and news stories suggest" and "Most people reporting 'Death Grip' are only seeing problems in weak signal areas." The point: Not everyone is dissatisfied with iPhone 4.

I'm not bothered by the so-called "Death Grip," and I live in a lousy AT&T reception area. In my first 10 days using iPhone 4, I had all kinds of calling problems, which I later determined were caused by some strange incompatibility between iPhone 4 and my Nokia BH-804 Bluetooth earpiece. Switching to the Jawbone Icon fixed consistent problems of garbled calls. But Death Grip isn't much affecting my calling. Sure, the number of bars reduce when holding the phone flush to my left palm, but nothing more. Instead, I generally find the signal stronger and more available in more places than with iPhone 3G or 3GS.

I'm so satisfied that I'll be recommending iPhone 4 in my upcoming review. This is the first time I've ever endorsed iPhone. I panned iPhone 3G twice -- in September and December 2008 reviews. I didn't bother writing a formal review of iPhone 3GS, which I tried three different times; in my most recent test (April-May 2010), I chose the Google Nexus One over the iPhone 3GS.

We have discovered the cause of this dramatic drop in bars, and it is both simple and surprising. Upon investigation, we were stunned to find that the formula we use to calculate how many bars of signal strength to display is totally wrong. Our formula, in many instances, mistakenly displays 2 more bars than it should for a given signal strength.

Then there are reports that Apple is allegedly killing forum posts linking to blog post "Why Consumer Reports can't recommend the iPhone 4." Apple is taking the ostrich-with-its-head-in-the-sand approach to Death Grip: Denial. "There is no problem." Well, hello, earth to Apple: There most certainly is a PR problem, and it's getting worse by the hour. Apple's shares range from $261.21 yesterday to $246.89 earlier today. It's a helluva up-and-down chart, with declines following Consumer Reports' blog post, which seemingly contradicts the broader Consumer Reports review that puts iPhone 4 ahead of other smartphones. 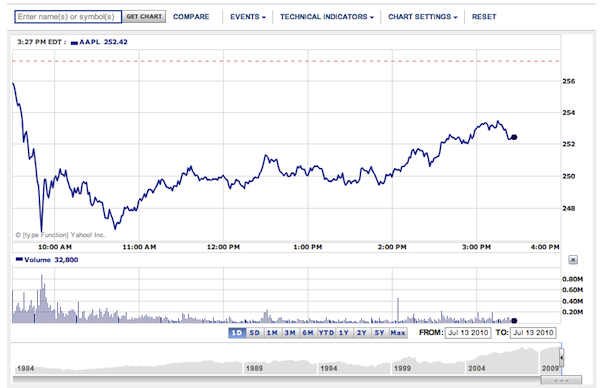 Perhaps Dan Frommer felt something about his earlier post, because about 45 minutes later he blogged another: "Sorry, But This Whole iPhone 4 Antenna Thing Is A Non-Issue And Will Blow Over." I totally agree. Frommer writes:

The bigger and more successful Apple gets, the easier it becomes to poke holes in the company. And the more fun people have beating up on Apple, and the more notoriety they get, etc. Seriously, when's the last time you thought of Consumer Reports before this week? But like every other tech PR calamity -- Facebook redesigns, Google privacy, etc. -- this will be news for a few more days and then life will go on.

To answer his question: Almost never. Consumer what? Frommer emphasizes: "There's no reason for a huge recall. This isn't a faulty car that might kill you. It's a phone, and it's a phone that works."

He is exactly right. Calls for an iPhone 4 recall are simply ridiculous. Apple has created an exceptionally good smartphone. Death Grip won't kill you. But the negative hype might kill Apple's share price for a few days -- at least until the fiscal Q3 earnings announcement on July 20.

[Update:: As several commenters have pointed out, people can return phones within 30 days. Apple might consider extending the return period to 45 days, in sign of goodwill.]

58 Responses to Apple should NOT recall iPhone 4