Catalogs.com gets the Flipboard treatment with new iPad app

Since the launch of the Apple iPad last January, print media has been reinventing itself for consumption on touch tablets. Magazines such as Glamour, GQ, Gourmet Traveller, The New Yorker, People, Popular Science, Vanity Fair, and Wired have all debuted subscription apps for iPad. E-books have also found a home on the iPad with apps from Amazon, Borders, Barnes and Noble, and Apple.

But in June, a huge splash came from the iPad app Flipboard. Heralded as "publishing revolution" by tech pundit Robert Scoble, and backed by high profile investors such as Twitter co-founder Jack Dorsey, and Facebook co-founder Dustin Moscovitz, Flipboard showed how the iPad could take Web data and make it into something more like a magazine.

Shopping site Catalogs.com today has launched its application for iPad, giving the "Flipboard treatment" to the link-based interface of catalogs.com.

While Catalogs.com is rather cluttered with links, and all shopping is done on the sites that it links users to, the iPad app has put together an experience that feels more like a paper catalog. From the first page of the app, you can select which catalog you will be browsing. The version we tested had just under 30 catalogs, including Musician's Friend, Eastbay, CCS, and Xtreme Geek. You can leaf through the individual catalogs and assemble a single, unified wishlist. The entire browsing experience is contained within the app. When you want to make a purchase from a catalog or from your wishlist, only then do you have to navigate to a service's website. 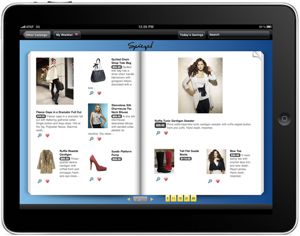 Because the app isn't as visually appealing as Flipboard, it feels less than revolutionary. However, it still takes the Web shopping experience and turns it into a touch-based one, optimized for the iPad. Further, the partnerships Catalogs.com has with online retailers are many, and promise to yield exclusive savings, and special discounts in the future, so it has a great deal of potential.

Catalogs.com for iPad can be downloaded in the iTunes App Store now.