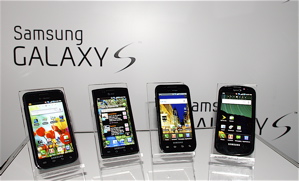 Attempting to more completely take on Apple, Samsung on Monday said that it planned to release the Galaxy Player. The touch screen device would essentially be like its Galaxy S smartphone without the cellular capability: just like the difference between the iPhone and the iPod touch.

8, 16, and 32GB versions of the device would be made available, which would run on Android 2.2 "Froyo." The form factor would follow one similar to the iPod touch, and include a 4-inch LCD screen, Bluetooth capability, and front and rear facing cameras.

The release of the Galaxy Player has been confirmed to come during CES 2011, enthusiast blog Samsung Hub reports. Samsung did not specify a retail release date.

Samsung's success with its Galaxy Tab tablet -- the only device in the category other than Apple's iPad to sell in considerable numbers -- may be fueling its desire to take on the Cupertino company on yet another front. That said, no company has yet been able to make a serious dent in its dominance of the digital music industry.

It won't be easy for Samsung: the company has only dabbled in music devices, and it lacks an integrated solution a la iTunes and the iPod. Several other companies, most notably Sony, Creative and Microsoft, have tried to compete with Apple but none have managed to make a dent in one of Cupertino's key businesses.

As well as being the debut of the Galaxy Player, Samsung also plans to show two other Android powered portable music devices: the YP-G50 and the YP-GB70.