Is iPad a PC? Canalys says yes, and that makes Apple No. 3 in global market share 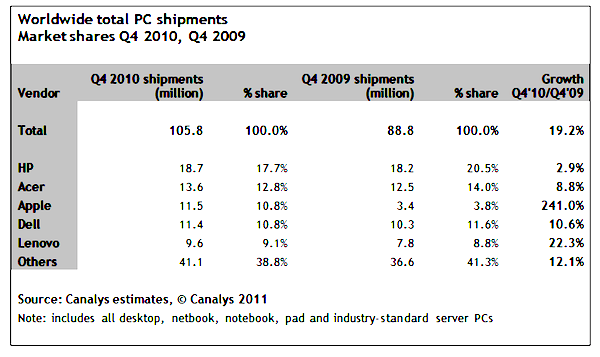 In August and, again, in October, I asked if Apple would be the US PC market share leader if iPad counted in the numbers. It's a compelling question because of iPad's sudden sales success and analyst firms' strange classifications. For example, IDC counts iPad as a media tablet but slates running Windows as PCs. Today, Canalys released numbers counting iPad as a PC, which propels Apple to the No. 3 spot globally. Canalys' data is for fourth calendar quarter 2010.

My question for you: Should iPad or Samsung Galaxy Tab really count as PCs? Canalys counts both and other tablets. Please answer in comments.

"Any argument that a pad is not a PC is simply out of sync," Daryl Chiam, Canalys senior analyst, said in a statement. "With screen sizes of seven inches or above, ample processing power, and a growing number of applications, pads offer a computing experience comparable to netbooks. They compete for the same customers and will happily coexist. As with smartphones, some users will require a physical keyboard, while others will do without."

Chiam emphasized: "Pads gave the market momentum in 2010, just as netbooks did the year before. We are encouraging vendors to plan for the future and not to remain stuck in the past." He added: "Each new product category typically causes a significant shift in market shares. Apple is benefiting from pads, just as Acer, Samsung and Asus previously did with netbooks. The PC industry has always evolved this way, starting when Toshiba and Compaq rode high on the original notebook wave."

Canalys' position on iPad butts against most other major analyst firms, not just IDC, and exposes one potential area of conflict of interest. Analyst firms like Gartner and IDC get paid to count things. By classifying iPad as a media tablet, the firms can sell data around a new category. There's less sales benefit when incorporating tablets into PC shipments.

Again, that assumes a tablet should be a PC. Again, I ask you: Is iPad a PC? Please answer in comments.

22 Responses to Is iPad a PC? Canalys says yes, and that makes Apple No. 3 in global market share