Microsoft is the plague: Nokia stock drops 14% as 1,000 employees walk out

First Tunisia. Then Egypt. Now Nokia. The twittersphere is again afire with buzz about massive protests. They're not political this time, but the outcome could be just the same. Can Nokia CEO Stephen Elop survive the revolution?

Nokia employees aren't responding well to today's sweeping deal with Microsoft. They're mad, as they should be. A few hours ago I called the agreement, which swaps Symbian for Windows Phone as Nokia's primary mobile platform, a "silent takeover...If I were a Nokia employee or investor, I'd stage a revolt." Apparently employees and shareholders are doing just that.

Investors punished Nokia shares with a 14-percent decline. Meanwhile, about 1,000 employees walked off the job, using flexible work-hour plans to do so, apparently protesting Nokia's deal with Microsoft. There is plenty of Twitter buzz, unfortunately too much of it in Finnish (Hey, my second language was Latin, and I'm rusty at that). But the reaction I can read is absolutely chilling.

Nebil: "#Nokia RIP. #Microsoft will leach you out of your existence. Nokia bends to pick up the soap."

Turcu Ciprian: "I think #nokia did a big mistake. No offense #microsoft but Android would of been a better way to go if they wanted a slice of the cheese."

Rajinder Yadav: "#Nokia just added fuel to their man on a burning raft. They just killed the QT developer ecosystem today for MS and .NET"

Justine Devine: "I should start writing a case study now about how #Nokia put themselves out of business."

Tom Reestman: "I wonder if Elop thinks his 'relationship' w/ #Microsoft will keep him from getting screwed by them down the road?"

Dale Wilson: "Did #Microsoft send #Elop to #Nokia to stage a coup? Hmmm ... What do you think?"

Nick Robinson: "Has any other company ever scrapped the OS with the largest market share in favour of one with the smallest?"

Steven Frank: "A 20 year regime comes to an end after populist revolt."

Helge Reikeras: "#Nokia you are officially dead to me now."

Purnateja: "Why Did Stephen Elop decide to Elope with Microsoft?" 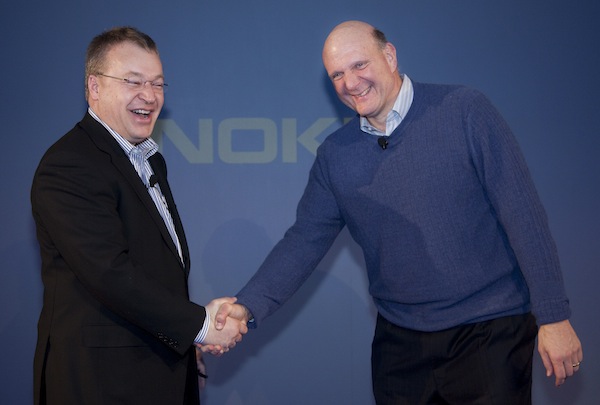 The questions now to ask:

Remember, Elop only went to Nokia in September, surprisingly giving up his cozy position as president of Microsoft's Business division. He's not only new chief executive but a foreigner -- a Canadian, giving an American company huge influence of one of Europe's oldest industrialists. These are all marks against Elop when tallying up the benefits (none that I see) from today's Microsoft deal.

Elop may have thought he was starting a revolution, by making so much dramatic change to Nokia. In the end, he may be the victim of a counter-revolution staged by Nokia employees, investors and loyalists. At the least there should be some official investigation into the ties that bind Nokia and Microsoft: A major Microsoft executive becoming Nokia CEO and then cutting a deal six months later that is hugely beneficial to his old company. Something stinks in Finland and also Washington state.

99 Responses to Microsoft is the plague: Nokia stock drops 14% as 1,000 employees walk out