I've been thinking more about both questions since learning last night that Google is pulling Facebook contact sync with delivery of Android 2.3.3 to Nexus S smartphones. In a statement, a Google spokesperson described the feature removal as "special-case handling of Facebook contacts" for "Nexus S and future lead devices." Google's reasoning: Facebook doesn't allow exporting of contact data to other services. There is no "reciprocity." Maybe, but there is more going on here than the openness, or not, of contact syncing. Google is prepping for a larger battle, particularly with Facebook, over who controls your online identity, particularly as it roams from PC to mobile devices.

After I posted about the Android 2.3.3 update yesterday, colleague Tim Conneally and I chatted about Google's maneuver, about which he made an astute observation: That the smartphone will most likely become the future hub for peoples' identities, not big cloud social networks. Facebook is in position to leverage its service to the future hub -- already is doing so through one-way sync, Facebook Connect logins and the mobile app for various smartphones and tablets. Strategically, Google should want to control the smartphone identity hub, too. Android's explosive popularity is reason enough. Already, a Google account is the important ID for activating an Android phone and using additional cloud services. Facebook sync treads on Google turf.

For 500 million Facebook subscribers, the social networking service is an important -- for many, essential -- identity and relationship hub. But there are many other -- really too many other -- online identities. You have one identity for your bank, another for Amazon and others -- corporate network, Google services, Last.fm, Microsoft Live services, tumblr, Twitter, WordPress.com and many, many more. But an increasing number of services are consolidating identities. For example, many sites now offer or even require Facebook or Twitter account IDs to post comments. These sites benefit from linking to the cloud services.

Facebook's mobile presence is increasing, with its successful mobile app and mobile logins for services supporting the set of Facebook Connect APIs. According to Facebook, 200 million subscribers access the service from mobile devices -- that's right, 40 percent. Mobile users are reportedly twice as active on Facebook as other subscribers. Today, Ovum released report "Mobile Social Networking: change driver & key players" with a dire warning: "Facebook is encroaching directly on mobile operator territory and should not be underestimated," report author Eden Zoller said in a statement. "Facebook wants to integrate with everything and be the main way that people consume and share information, anywhere and on any device." 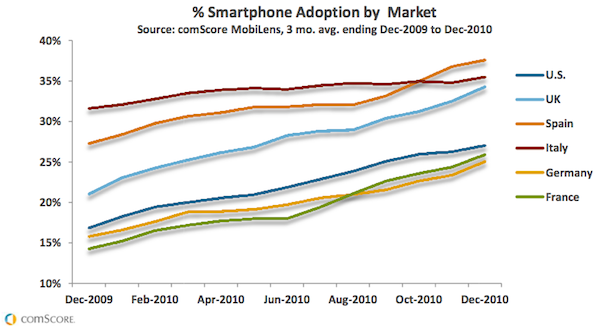 Zoller also addressed recent rumors. "There is also intense ongoing speculation that Facebook will come out with its own phone, which in some respects would be the final piece of the puzzle," he continued. "This would in effect make Facebook a social operating system."

Social operating system is the last thing Google would want competing with Android or Chrome OS. But there's competition enough today, with Facebook and Google already vying to be mobile identity hubs. What differentiates Facebook from Google identity efforts is relationship. The social networking service allows people to connect, on the go, meaningfully, in ways the search and information giant can't remotely touch.

Twelve days ago, ComScore released report "The 2010 Mobile Year in Review," looking at mobile behavior for people 13+ years old from seven countries: France, Germany, Japan, Italy, Spain, United Kingdom and United States. By the way, to get the ComScore report, I had to give up information about my identity -- name, job title, organization, country, state, city, email and phone number.

"In December 2010, nearly 47 percent of mobile subscribers in the US were mobile media users (browsed the mobile web, accessed applications, downloaded content or accessed the mobile Internet via SMS) up 7.6 percentage points from the previous year," according to the ComScore report. During the 12 months from December 2009 to December 2010, the number of US smartphone owners rose from 16.8 percent to 27 percent. Smartphone install base: 63.2 million. By the end of 2010, "3G/4G phone ownership reached 51 percent." 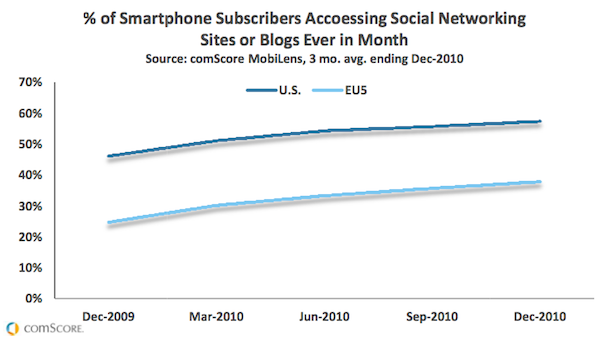 Nearly 60 percent of US and 40 percent of European smartphone users accessed social networking sites at least once a month in December 2010, according to ComScore. Daily usage jumped 104 percent year over year in Europe and 80 percent in the United States. "The growth of social networking via mobile devices is mainly driven by Facebook, which reached 90 percent of US social media users and 85 percent of European users, and grew more than 120 percent over the past year in both regions...The most significant difference in 2010 is the trend for MySpace, which declined 20 percent of in the U.S. but gained 32 percent in Europe."

One metric often overlooked by bloggers and journalists reporting about online activities is time spent online. "In the UK, Facebook was the clear leader in a ranking of top sites by time spent," according to the ComScore report. "In December 2010 the 7.5 million unique mobile visitors spent a total of 2.5 billion minutes on Facebook.com, averaging 5.6 hours per visitor during the month."

Smartphone shipments are expected to explode in 2011. Last year, Europe and the United States accounted for more than 52 percent of sales, according to Gartner. There is no reliable forecast for 2011, since major analyst firms up the numbers every couple of months. During 2010, 1.6 billion mobile handsets were sold, of which 297 million were smartphones -- or 19 percent. Sales grew 72 percent year over year.

Global Android handset sales grew by 888.8 percent year over year, from 6.8 million to 67 million units, according to Gartner. Android is on fire, which is great for Google signing more users to its identity service. One problem: Facebook is there, too, competing for Android users' time and attention. Meanwhile, Facebook rolls out mobile services that increasingly compete with Google's. If we've truly entered the cloud-connected device era, who controls your mobile identity, which is likely to be the same as your broader online identity, will be increasingly important.

Tactically, with the removal of Facebook contact sync from Nexus S, Google has drawn a line in the sand, made a demarcation for developers. They will use one set of contact APIs, which, in theory, will work consistently with Android across applications. Well, those that reciprocate, anyway. It's Google's first step to define rules for mobile identity on terms other than Facebook's. Remember, contacts and syncing them is tied to an identity. What Google hopes to achieve is a leveler playing field, where contact data can be easily shared among different online identities.

Google also is setting the stage for future identity pushes. For example, Nexus S and some newer Android handsets support Near Field Communication technology. NFC is limited today to functions like reading RFID tags. Even mobile phones that ship with the technology typically don't support it -- yet. Looking ahead, NFC is being touted as a way for processing payments -- essentially using a feature phone or smartphone as an ATM/debit card. That kind of functionality will be tied to an identity, something Google should want to control on Android as it does with supporting cloud services like maps, search and shopping.

So Google has another reason to stick it to Facebook -- solidifying its approach to identity and anything associated with it for developers. Contact sync is but part of the broader identity push that will support NFC and other future mobile technologies.

Who owns your mobile -- and even online -- identity? In theory you do, but with limits if the relationships and data are tied to a service that provides APIs for data going in but doesn't support other providers' APIs for data going out. That's yet another aspect of the identity dispute between Facebook and Google. "Since Facebook contacts cannot be exported from the device, the appearance of integration created a false sense of data portability," a Google spokesman said in a statement provided to Betanews yesterday. "Like all developers on Android, Facebook is free to use the Android contacts API to truly integrate contacts on the device, which would allow users to have more control over their data."

It would also give Facebook a little less control over the user's identity, and that's great for Google's mobile identity objectives.

5 Responses to Google fights Facebook for your mobile identity