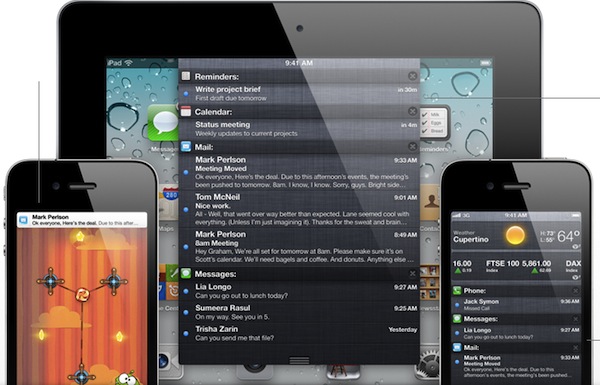 Apple's iOS 5 is slated for release this fall, presumably with iPhone 5. But the Android Army doesn't have to wait, like the iPhone idolators. Android users can have some of those features now. Looks like Apple has been doing a little copycatting. Again.

It's funny, since hardcore Apple enthusiasts are so quick to accuse whenever they see anyone copying the slightest thing from Steve Jobs' company. They're not as fast to acknowledge when Apple does the, ah, borrowing. I'm glad to do it for them.

With that brief introduction, here's my second top-5 list within 12 hours presented in order of importance.

It's coincidental there are two so close together; don't expect this to be habit.

1. Cloud Synchronization. iPhone users had pseudo-sync with MobileMe, which Apple is retiring, but it was nothing like what Google offers Android users. On Android phones, signing into the Google account syncs up all the search and information giant's services -- and when switching phones also restores apps, settings and personalized features, like desktop wallpaper. With iOS 5 and iCloud, iPhone users will get most of the sync benefits Androiders have long enjoyed.

2. Notifications Center. Apple gets kudos for better presentation, but Google had the concept first. Just about Android's best user interface feature is the notifications bar across the top of the phone's screen. Now, instead of annoying notifications that interrupt or are lost in numerical count on an app in another screen, iPhoners can enjoy the convenience of notifications collected in one place and pulled down for easy reference. Google be warned: I know lots of would-be iPhone switchers who stick with Android because of notifications.

3. Over-the-air updates. Apple has made iPhone slave to iTunes for far too long. How ridiculous that iPhone users have to plug in to a computer to update. Androiders have long enjoyed the convenience of OTA. It's about time Apple cuts the update cord that binds the iPhone chain gang. Free them! Freedom!

4. Photo sharing. Android users know the many benefits of using an open system, where developers are allowed to tap into the platform capabilities. One of my pet iOS peeves: Photo sharing. On Android, from the camera or photo gallery, I can send photos to any supported service installed on the phone. So if I want to take a photo and send to Twitter, Android let's me do that from the camera. Oh, but not iOS. Apple presents sharing options for its services but none other.

That will change with iOS 5, which will take Apple's grubby hands off and let third-party apps grab on. Photo sharing will be available from the camera and photo gallery. But why wait, when Android has your back? Today.