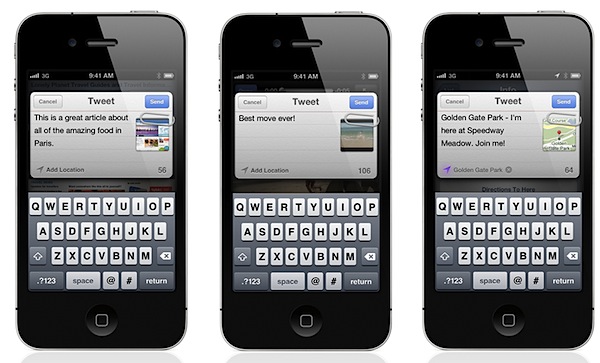 Apple will deeply integrate Twitter into iOS 5 when it releases this Fall, but not Facebook. Now why is that? Facebook is the largest social networking platform on the planet, with more than 500 million users, according to the company (Hell, I thought it was closer 700 million based on multiple -- and unconfirmed -- press reports and blogs). Surely Apple already greatly benefits from the the social network's iOS app. Why not do more?

I can't speak for Apple CEO Steve Jobs and his executive team, obviously. Perhaps the major reason is nothing more complex than Apple and Facebook failing to reach terms either could agree to. After all, there would be more to it than just leveraging APIs. However, I see some very good reasons why deep Facebook integration into iOS would be a bad move for Apple.

Conceptually, it's easy to see why Apple might want to give Facebook preemo placement in iOS -- it's not rocket science. The average Internet user spent 12.3 percent of his or her time online at Facebook in 2010 -- that's about one out of every eight minutes -- according to ComScore. Another metric: U.S. Internet users spent an average 6 hours and 23 minutes on Facebook in April 2011, says Nielsen. AOL Media Network was a distant second with average 2 hours 33 minutes. From the perspective of where people spend most of their time -- and looking at everybody else trying to align with Facebook somehow -- it would be easy to see Apple doing the same.

But Apple and Facebook actually have several conflicting strategic objectives, and their platforms are juxtaposed. Apple wants to push users' content to the device, whereas Facebook wants to pull content to the cloud. The differences will be starker when Apple rolls out iCloud, presumably concurrently with iOS 5 and iPhone 5 in the Fall. Contrary to some Net punditry and commentary, iCloud is not an online storage service. It is fundamentally a synchronization service, using the cloud to help Apple customers better manage their content on iOS and Mac OS X devices.

User-generated content is important to both companies, but in dramatically different ways that create, in some respects, incongruous customer priorities. Apple wants user content flowing freely among the devices it sells, while Facebook's priority is content going into the service -- and not easily coming out. Apple and Facebook also seek to lock in customers through necessary utility, but the means are different and largely incompatible. Facebook locks in customers through relationships (where friends, family and anyone else hang online) and access to content, which goes easily into the social network but comes out with greater difficulty -- if at all. Apple wants content to flow freely (at least among devices running its operating systems). Synchronization, and the convenience of it, will hold Apple customers.

Another difference in priorities: Apple makes the majority of its revenue from selling hardware -- 90 percent during fiscal 2011 second quarter, based on the quarterly report. By comparison, Facebook derives the majority of its revenue from advertising and cloud services. As such, the companies' revenue -- and, related, customer content -- priorities couldn't be more different. Twitter's revenue model is also content in the cloud, but with stark differences to Facebook, one of the more important being platform approach.

In the post, I described Facebook as an "operating system in the clouds." Nearly four years later, little has changed. Developers write applications for Facebook's largely closed cloud OS. Whereas, Apple developers create apps for iOS and Mac OS X running on devices. From a platform perspective, Apple and Facebook are competitors. Yes, there is mutual benefit from the Facebook app, but from platform and app development perspectives, the companies are competitors. The developer incentives are different, too -- Apple's revenue sharing being the major one and the number of Facebook app developers using the social service to mine data and target customers being others.

It's All About Status

Facebook and Twitter do share something important in common that makes tweeter-dee more attractive to Apple than Like-dum: Status. Both services are really about status -- what people are doing, where they are doing it and with whom. Facebook and Twitter provide tools for sharing photos and videos about these engagements and relationships. Twitter restricts sharing to 140 characters and uses more of a broadcast model, where people chose to subscribe to someone rather than join their network as friend. Facebook's relationship approach is more exclusive. Twitter's is not.

Apple can provide its customers the benefits of status, essentially using Twitter as part of a social networking framework, without taking on Facebook baggage and becoming dependent on a growing competitor for customers' time and content. Twitter setup will be part of iOS 5 settings and allow iPad, iPhone and iPod touch users to tweet from Google Maps, Safari, YouTube and other apps; the camera and photo library, too. Twitter becomes the important social status mechanism for iOS, also providing location information and offering integration between @ Twitter users and the devices' contact list. Some of this capability is available today from the Facebook app. It will be pervasive within iOS 5 for Twitter.

Still, some analysts, bloggers journalists or other commentators will insist that Apple really needs Facebook, if for no other reason than time online. Poppycock. For all the time people spend online at Facebook during any given month, they spend so much more time on their iOS or Mac OS X device(s). I don't need analyst data to quantify it. If you're an iPad, iPhone or iPod touch user, ask yourself how much time you spend per day on the device(s). For some people, it's more than 6 hours and 23 minutes a day!

From that vantage point, Apple's priority is clear: Maximize the customer experience on its devices rather than look to Facebook benefits, which are sufficient enough with the social service's iOS  app.