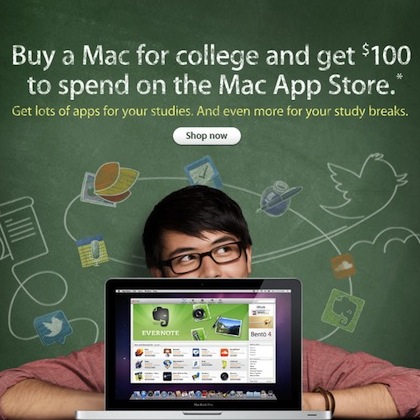 This morning, I awoke to find email from Apple about its 2011 school promo -- "$100 Back to School Card to use on the Mac App Store" when buying a new computer. In past years, Apple gave away iPods, which had higher resale value. For example, last year, students got an 8G iPod touch, worth $199, for free (well, they paid up front and received a rebate).

The promotion may be as much about future marketing as selling more computers to students now. The Mac App Store is an add-on to Mac OS X 10.6 Snow Leopard and it's built-in to Lion, which goes on sale next month. Apple is slowly, but deliberately, shifting software distribution to the digital web store. For example, Lion will be available download-only for about $30. It's in Apple's best interest and that of its development partners to get students used to buying from the Mac App Store, which also can deter piracy. Better for Apple and its developers that students spend $100 on something rather than grabbing it from some torrent site.

The promotion misses something that many parents might want: Microsoft Office. The productivity suite isn't yet available from the Mac App Store, although Amazon started offering Office digitally delivered late last month. That $100 gift card won't apply, of course. It's my personal experience, as parent of a high schooler, that Google Apps is increasingly popular with Millennials, who can buy Apple's productivity software if they want it. The three iWork apps cost about $60 from the Mac App Store.

Something else: Margins are considerably higher on software. Apple incurs no physical product cost, including manufacturing, distribution and redemption (for rebates). Apple collects 30 percent of third-party software sales, so it's pure profit even if students buy some other developer's product. That said, seven of the 10 top-selling Mac App Store applications are Apple's.

The stingier promotion is perhaps more practical. After all, wouldn't apps for school be more useful for school? If I was a student headed to college, iPod touch would appeal more, and perhaps be more useful -- and practical. Some schools require or strongly recommend that students have iPod touch. For example, the Missouri School of Journalism:

Effective with the Fall 2009 semester, incoming freshmen Journalism and pre-Journalism students are required to have a Web-enabled audio-video player. This requirement is best met by purchasing the Apple iPod Touch, which has all the features the Missouri School of Journalism intends to implement to achieve its academic objectives and those of its students. There are alternatives to the iPod Touch, but none that we consider equally capable...

At least 50 colleges and universities nationwide make use of iPods in their programs. Colleges as diverse as Stanford and Abilene Christian University use the devices similar to the ways the School of Journalism employs them...There is no device on the market other than the iPod Touch (and the more expensive iPhone or iPad).

Too bad there's no free iPod touch with that new Mac this year.

Apple announced its back-to-school promo later than usual. More typically it comes late-May to early-June. Microsoft did announce a back-to-school promo in late-May, and it offers more and conceptually costs less. Students spending $699 or more on a new Windows 7 computer receive a 4GB Xbox 360 for free -- a $199 value, or twice that of Apple's promo.

Upfront costs are less, too, since the cheapest Apple computer, available at discounted, educational price, is the white MacBook, at $899. The entry-level MacBook Air is $949, while the cheapest iMac is $1,149.

Let me ask you, as parent or student: Which back-to-school promo would get you to buy -- Apple's or Microsoft's? Would you rather have $100 gift card or free iPod touch from Apple? Please answer in comments.