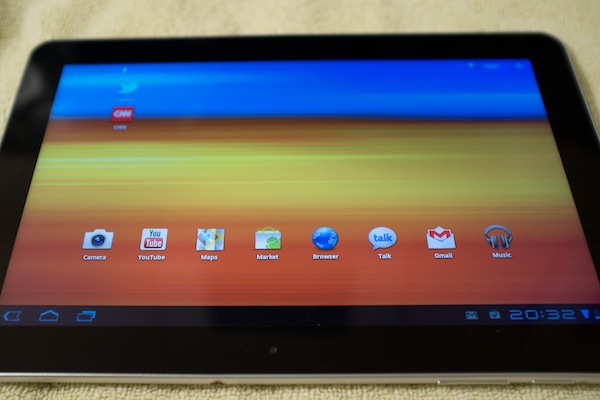 Gasp. You read the headline right. Today, Apple won an injunction against major rival Samsung. A Dusseldorf court issued the injunction, which is preliminary.

Did I not write just a few hours ago claiming Apple is engaging in competition by litigation, rather than innovation? According to IDC, Samsung is Apple's biggest competitor in the tablet market. But rather than compete, the market leader has engaged in a campaign to block Galaxy Tab 10.1 sales just as the tablet launches in many countries around the world. What I find so surprising: How easily Apple is let off by bloggers and journalists for bullying behavior that would generate scathing headlines if Google or Microsoft was the protagonist.

Apple filed the complaint under the EU's "community design" provision enacted in 2002 and 2003, This is not a patent dispute, per se, but one of look and feel -- does one product essentially immitate, or copy, another.

The preliminary injunction does not apply to the Netherlands, where Apple has filed a separate complaint.

"Preliminary injunctions in Germany take immediate effect, though an EU-wide one may require additional registrations in other countries (possibly a mere formality)", Mueller writes. "There can be a near-term hearing at which the decision may be reversed, but I've also seen cases in which such injunctions were in force and effect until the end of a main proceeding, which could easily take more than a year".

The question: Does Galaxy Tab 10.1 copy iPad? I don't think so, having used iPad 2 as well -- no more than iPad 1 could be accused of copying Windows Tablet PCs' general appearance. They're all tablet designs. Same basic shape, screen front, etc. If anything, Tab 10.1 looks less like iPad than other Android tablets, such as Motorola XOOM. To get the HD aspect ratio, Samsung made the Tab longer and thinner in portrait mode -- wider and narrower in landscape mode -- than is either generation iPad.

As soon as you pick up iPad 2 and Tab 10.1 you feel the difference, and I wonder how much that matters with "community design". Apple's tablet is cool feeling, because of the aluminum, while Samsung's device feels smoother because of plastic. Also, holding them feels quite different because of the shapes.

What do you think? Is Apple competing through litigation rather than innovation? Or is it protecting innovations? Yeah, I see bullying -- and that's in part because Apple's IP cases (other than trademark infringements) are aimed at major competitors almost exclusively. Please respond in comments.