Apple lied to get that injunction against Samsung Galaxy Tab 10.1? 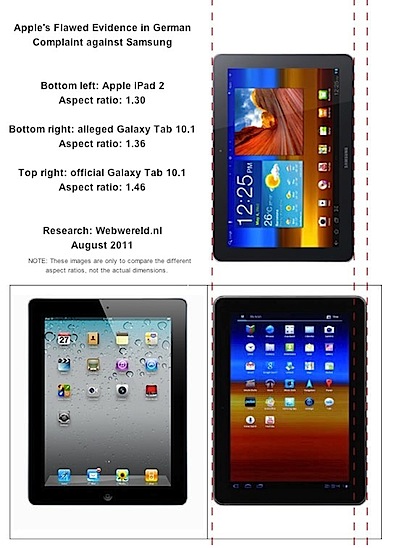 What? Is MG Siegler on holiday? TechCrunch's Jordan Crook has a sizzling story about Apple's bullying Samsung in German courts, not exactly the kind of stuff her Mac-loving colleague writes. I almost never re-report from another publication, but, damn, Crook makes sense out of what didn't make sense to me last week.

On August 9, a German court issued a preliminary injunction, banning sale of Galaxy Tab 10.1 in the European Union, with exception of Netherlands. Apple filed the complaint under the EU's "community design" provision enacted in 2002 and 2003, This is not a patent dispute, per se, but one of look and feel -- does one product essentially immitate, or copy, another. That baffled me for two reasons: The tablet form factor has been around for more than a decade and Tab 10.1 is longer and narrower in portrait mode than iPad. They're not the same shape. As soon as you pick up iPad 2 and Tab 10.1 you feel the difference, and I wondered how much that matters with "community design".

Crook has surprising explanation, but the real research was done by IDG's Dutch Webwereld.nl, which is the source of the image above. What's that saying about a photo being worth a thousand words. This chart speaks volumes. Crook notes: "The image of the Galaxy Tab 10.1 has been cropped and the image ratio has been tampered with. Samsung's tablet measures in at 10.1in x 6.9in x 0.34in, while the iPad 2 sports dimensions of 9.5in x 7.31in x .34in.

"In Apple's evidential image, the aspect ratio is 1.36 (8 percent wider than it should be), making the Galaxy Tab 10.1's 'overall appearance' look 'practically identical' to the iPad 2 (which has an aspect ratio of 1.30). And that's exactly the language Apple used in its complaint -- also on page 28. We've seen our fair share of lawyer screw-ups lately, but this fairly shady, no?"

It's fairly shady, YES! Apple got huge press bang last week in an unexpected ruling that stung Samsung's credibility and raised doubts about the Tab's future or Android on tablets in general. I've accused Apple of patent bullying and engaging in competition by litigation. But this!

As I explained earlier in the month, when Apple was a feebler company, even in the early years of CEO Steve Jobs' return -- the Second Coming before the Jesus Phone -- someone in some tech circle of mine would ask: What if Apple was as big and powerful as Microsoft? Wouldn't we all be better off? I usually heard that question answered "Yes" -- that Apple would never be as aggressive or anticompetitive as Microsoft was during its PC supremacy in the late 1980s throughout the 1990s. I always answered "No".

But this kind of behavior is much worse than even I anticipated. That August 25 hearing on the preliminary injunction can't come soon enough.

In my review of the complaint, which is German (which I don't read), there are numerous different photos of both products. The frontal side-by-side comparisons (there are two main images, one that is repeated throughout) present the Tab 10.1 in more squarish-fashion like iPad 2. However, some back views show the tablet as it is, as do some individual shots (not side-by-side with iPad 2). The important, and presumably most influential, are the side-by-sides. However, after a second review, I see side-by-sides at the very end of complaint that are better representative. But the meaningful impact is everything that precedes these two depictions.

I want you to click on this PDF copy of (European] Community design no. 000181607-000. Now, take a long hard look at it. What do you see? I'll tell you what I see, it's a freaking tablet. Yes, it looks like an iPad. But, it looks just as much like every tablet that's ever existed or ever will exist. It's a tablet. Where have I seen this before? Why, I remember! I recall my distant cousin Nichelle Nichols, that's Lieutenant Uhura of Star Trek to you, "using" a tablet on the Enterprise back in 1966...For all the excitement about the iPad, real tablets existed for decades before iPad mania came along.

I wonder what Photoshop magic the lawyers would make out of that one.

41 Responses to Apple lied to get that injunction against Samsung Galaxy Tab 10.1?