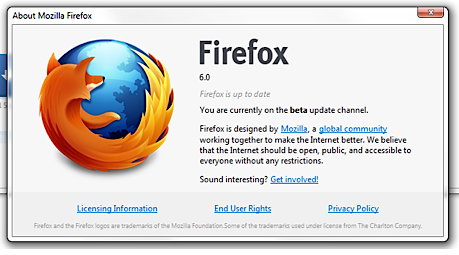 The browser market moves at a hectic pace these days, and so while a month ago most people were happily using Firefox 5, Mozilla has released Firefox 6, Firefox 7 beta, Firefox 8 Aurora, and even Firefox 9 via the Nightly channel.

Perhaps unsurprisingly, most of the changes are internal and will make little immediate difference to most people.  We ran a few benchmarks on the various builds, for instance, and found Firefox 9 had around a 4 percent lead over Firefox 6, but otherwise the performance of Firefox 7, 8 and 9 proved very similar.

What's the best build for you, then?  Here's what you need to know.

This is the latest stable release of the browser, and the best choice for most people, in particular if you use a lot of extensions (they're less likely to work if you install later builds).

Perhaps the best addition to this build is the Permissions Manager. Enter about:permissions in the Address Bar and you'll see a list of the sites in your browser history. Choose any one of these and you're then able to define its permissions: you can forbid the site from opening pop-up windows, for instance, or restrict its use of cookies, while other options control the site's ability to store passwords, access your current location or maintain offline storage.

And elsewhere, new developer tools include a Scratchpad (Web Developer > Scratchpad), where you can manually enter some JavaScript, have this evaluated, and browse the results with the Object Inspector.

Firefox 7 is the first version of the browser to benefit from Mozilla's MemShrink project, which aims to cut Firefox memory consumption. Evaluating progress in this area is difficult, as everyone will see different results depending on their Firefox use, but the tests done so far suggest Mozilla's efforts are bearing fruit. A blog post on this topic reveals that Firefox 7 commonly uses 20 percent to 30 percent less RAM than its predecessors, and sometimes as much as 50 percent less, dramatic changes that should also help to improve performance and stability.

The other major addition in Firefox 7 is the Azure 2D graphics API, which should also make a significant difference to the browser's performance -- eventually. Right now it delivers very variable results, though, so this build is mostly for people who want to check out the improved memory management system.

The latest Firefox Aurora build will finally introduce a system to manage the external installation of add-ons. And so if a program tries to install a toolbar (or whatever) without asking you first, then a browser alert will allow you to choose whether you want to proceed or not.

And there's also partial support for an HTML5 feature that allows pages to dynamically insert markup into a document, which will provide web developers with a great deal of flexibility in the future.

If you're not a developer, though, there's no compelling reason to opt for Firefox 8; we'd wait until it hits beta, at least.

The good news is that Firefox 9 should be a release that you can tell apart from its predecessors, thanks to a clean, stylish and revamped UI. You can see some ideas on how this might look in a presentation from the Firefox UX team.

The not-so-good news is that this is some way off, though; the current Firefox 9.0a1 build looks barely any different to the current stable release, and its other features and overall performance are also very similar.

If you're feeling brave, then, or would just like to explore the browser to see what new features you can uncover, then give Firefox 9 a try.  Otherwise it's probably best to leave it until the new interface is implemented, which probably won't be happening for quite some time.