During the next natural disaster, don't even bother calling 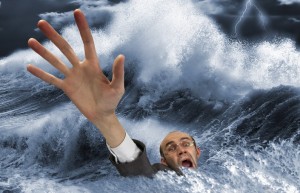 Earlier this week, the state of Virginia experienced the largest earthquake it had felt since 1944, and the entire Northeastern region of the U.S. shook. This weekend, the same region is expected to be slammed by Hurricane Irene, a category 2 hurricane reaching uncharacteristically far north. Frantic people making voice calls on their mobile devices immediately overloaded the networks after the earthquake, so let's make sure that doesn't happen during the hurricane.

Millions took to posting on social networks in the moments that followed the earthquake this week, and an untold number of people began making mobile phone calls to check in or check up, promptly overloading the networks, forcing many to use the web as their fallback method of communication.

Because most of us here at Betanews are from the greater Washington DC metro area, when we discussed this mobile phone collapse around the water cooler, we couldn't help but compare it to the 9/11 terrorist attacks and the ensuing panic immediately following them.

We all recalled the cellular networks being jammed during 9/11, but surely that event would have caused an even greater stress on the network than a little earthquake with no casualties and only minor property damage.

So why did the networks go down so fast?

Is it because voice calling over 3G is somehow more network consumptive than the network technologies that were being used back in 2001?

"It's not so much that the 3G technology itself would result in worse congestion than 2G technology in the past," Jani Lyrintzis, Vice president of professional terminal solutions at EB told us. "It's more the fact that iPhones, iPads, and other smartphone and tablet devices have driven up the data traffic needs, and carriers and network operators have responded by allocating more circuits to packet-switched data traffic, rather than traditional circuit-switched voice traffic, which means that when the earthquake hit, there were not enough voice circuits to handle all the calls."

Voice networks, no matter if they're analog or digital, will create an exclusive circuit between two parties for a call, and it lasts the whole session, and is effectively "closed" for the length of the call.

Data networks, on the other hand, use packet switching, and devices send bursts of data only when needed. This way, they can share the space more effectively among lots of users without having to open dedicated channels between two users.

"This is not a limitation on technology, but rather the way the carriers have implemented their networks to handle the data traffic," Lyrintzis concluded.

This is why the operators suggested that everyone use SMS or the Web to communicate during the quake, because it is simultaneously less resource consumptive, and it fits more appropriately into their network architecture as their mobile data networks grow.

3 Responses to During the next natural disaster, don't even bother calling