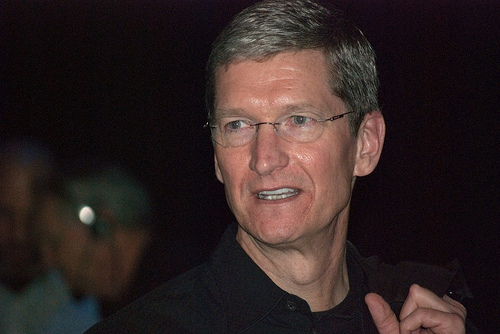 Well, so much for Apple cofounder Steve Jobs' infamous $1 pay.

Just two days after taking the chief executive's chair from Jobs, Tim Cook received a stunning 1 million shares from Apple. It's restricted stock -- meaning shares won't vest for years --- but it's big money, about $383.58 million at today's closing price of $383.58. Thank you Apple for making the math easy for the end of another shockingly busy tech news week. Whatever happened to August vacations and no big biz activity until after Labor Day?

Huge stock awards aren't unusual, particularly for incoming CEOs. Boards of directors use restricted shares as incentives for CEOs to do well and to stay with the company. Not that it often matters. Exiting CEOs, particularly from a company of Apple's size and stature, often walk away with severances in the tens of millions anyway. Cook will make out. By how much depends on how long he stays with Apple.

According to an Apple 8K filing, Cook must wait until 2016 for half the shares and 2021 for the remainder. Of course, with this week's hurriquake on the East Coast, other natural disasters, solar flares and anomalies, none of us may make it past Dec. 21, 2012. Oh, those Mayan predictions!

Cook's salary as chief operating officer was just over $800,000 in fiscal 2010, with a $5 million bonus and more than $59 million in restricted stock. By comparison, Apple paid Jobs $1, with no bonus, but reimbursed him $248,000 for air travel. However, Jobs' stock holdings are substantial, making him a billionaire.

The amount of executive pay reveals something about the personality of the two men -- the one inspired by passion, good taste and innovation and the other by the logistics of running a business. What? You think Cook will work for a buck a year?