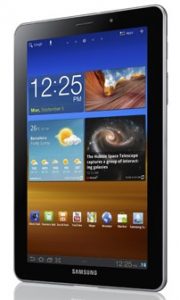 In an age where our phones seem to be getting bigger and our tablets smaller, Samsung's latest addition to its Tab family is no exception. The Korean company introduced a 7.7-inch version of its popular tablet, complete with Android 3.2 and Super AMOLED Plus display.

The device is a followup to last year's original 7-inch Tab, but is the first tablet from the company to use Samsung's better display technology. It also features 1280 x 800 resolution, one of the best in its size class. Super AMOLED means the display will be viewable in sunlight.

As to pricing and availability, that's still up in the air. At its press conference at IFA Berlin, Samsung would only offer that the device would be available "in the next coming months". Tab 7.7 is among a small but growing number of smaller tablets running Honeycomb, which has been more common among 10.1-inchers.

While the device weighs in at about 12 ounces, its .31 inch thickness makes it just a hair thinner than Apple's iPad 2. A 1.4GHz dual-core processor powers the device, with size options of 16GB, 32GB and 64GB. An included MicroSD slot allows for 32GB of additional storage.

For connectivity, Tab 7.7 supports Wi-Fi and HSPA+ capable of up to 21Mbps. Samsung is also claiming 10 hours of battery life for video playback, quite impressive for its class.