5 Things Microsoft should do at BUILD 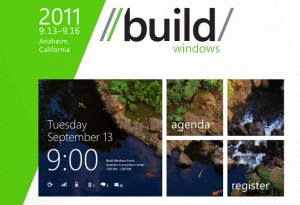 Can you hear it? Can you hear it coming? Microsoft's Windows developer conference is almost here. BUILD kicks off September 13 in Anaheim, Calif., and it's going to be big, big, BIG. Microsoft will give Windows 8 its formal unveiling -- everything else before was just movie previews. No new Windows version is really official until Microsoft presents it to developers.

But there's more. Microsoft moved its annual Financial Analyst Meeting from July to September, coinciding with BUILD. It's a colossally smart move. Wall Street geeks and technophobes will have chance to get caught up in the energy and enthusiasm of Windows 8 -- and Windows Phone "Mango", too. Microsoft really needs to energize analysts about these products and how they're not so much the past but vital forces for the so-called post-PC era.

I present five things Microsoft should do next week. These aren't recommendations, since it's too close to BUILD for Microsoft to follow my lowly advice. It's what I expect from Microsoft, if the Windows operating system teams hope to churn up the kind of positive reaction that can ignite developers and spread the fire to Windows enthusiasts and customers.

1. Give everyone Windows 8 slates. No developer, no financial analyst, no news media attendee should leave BUILD without an ultraportable or tablet PC running Windows 8 beta. Hell, Google gave participants to its I/O developer conference Samsung Chromebooks and Galaxy Tab 10.1 tablets. Microsoft should do even better.

There's precedent. PDC 2009 developer attendees received free thin-and-light laptops designed by Microsoft and Acer. These portables were reference designs for developing apps. Microsoft should do at least the same next week.

2. Give all participants Mango smartphones. Why stop at ultrabooks or tablets? The first Mango smartphones are ready to ship, and Microsoft needs to rally developers. What? Microsoft should let its core use iPhones or Androids? Hell, no! Give developers phones and free cellular and data service for a year, if they personally use them. Make it hard to say no. Some wonky bloggers will scream "Bribery!" Frak them. Windows Phone is part of a larger Microsoft ecosystem of products and services (see #3).

3. Introduce a new far-reaching strategy: "Three screens and a cloud" Catchy, eh? For years Microsoft has talked about its three-screen and cloud strategies, separately and loosely connected. With the development and platform changes coming next week, Microsoft should formally and exactly tie together three screens and the cloud.

It's clear that when looking at XNA, HTML5 and other technologies, Microsoft is rapidly unifying development around Windows 8, Windows Phone, Xbox and its cloud services. The vision must be communicated with absolute clarity and certainty next week, as much for financial analysts as anyone else. They have to see the vision of the Microsoft connected lifestyle. Too many of them drank the Apple Kool-Aid. Don't believe that? Count how many analysts will be carrying iPhones and MacBook Airs or Pros next week.

4. Unveil a unified Windows marketplace, one place for apps of all varieties -- cloud productivity, Internet Explorer 9, Windows Phone, Windows 7/8 and Xbox. Microsoft must present to developers and customers a connected business and personal lifestyle. A unified app store should be one of the experience's pillars. Developers get the convenience and assured revenue confidence/piracy protection from a single, unified market for all Microsoft platforms.

5. Debut Metro OS. One of Windows 8's most exciting new benefits is the tile-like Metro desktop UI, which is optimized for touchscreens. But behind it remains Windows legacy code for the seemingly zillions of enterprises and developers needing support for existing apps. Why not break out Metro instead, as a separate operating system? It would be much more than a Windows lite or embedded but much less than the legacy operating system.

Now that Windows will support ARM processors, Metro OS could be adapted for all kinds of touchscreen devices, everything from ATMs, to retail kiosks to tablets. Sure, Microsoft has Windows embedded, but Metro OS would be better because of the emphasis on touch. These third-party products could help sell Windows, too, because people would become used to the tile motif everywhere.

Metro OS also could extinguish Chrome OS. Google's browser-based operating system has merit, but the motif is archaic in a touchscreen world. HTML5 already is core to Microsoft's development approach for Metro UI. How hard would it really be for Metro OS to push Chrome OS into the waste bin?

12 Responses to 5 Things Microsoft should do at BUILD