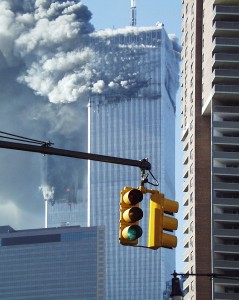 Today, around the globe, people are, sadly, commemorating the 10th anniversary of the September 11, 2001 terrorist attacks. In posting my remembrance, I got to thinking how much has changed technologically and how much circumstances could have been different that day if the resources we take for granted now were available then.

Advanced communications technology of the day was the cell phone, which people trapped in the Twin Towers used to reach family and friends. The cell phone helped warn passengers of United Airlines 93 about the other hijackings. The heroes of that flight sacrificed their lives to save many others. That couldn't have been possible without the cell phone. But what if the people living in 2001 could have used social services widely available today to warn others or offer dramatic, first-hand accounts, photos and videos of events as they unfolded. The historical record -- and tribute to the lives lost that tragic day -- would be much different.

The most dramatic technological changes occurred not during the last 10 years but the last five. Consider YouTube, which is now very much a part of global culture. Its influence is seemingly everywhere. But YouTube only opened to the public in November 2005. Google bought YouTube about 11 months later -- less than five years ago. Twitter also debuted in 2006, but didn't reach mass awareness for another three years. Facebook opened to the public in 2006, as well. The majority of the most popular or growing popular tools for community and self expression launched within the last five years: Disqus, Google+, tumblr, Qik and USTREAM, among many, many others.

For all the babble about iPhone, it's a recent invention, debuting just four years ago. Apple's App Store came in 2008, as did Google's Android and Chrome browser. The list of services that people use to connect are, for the most part, just five years old. The first real sense of what the tools could mean for connecting people, getting out information and even how it's reported the world over came in summer 2009 -- just two years ago -- on the streets of Tehran. The best reporting on the Iranian protests wasn't from CNN or many news organizations but Flickr, Twitpic, Twitter and YouTube. Tweets, images and videos poured out in real time. Where did CNN get some of its best material? Citizen journalists, like this story and images from CNN’s citizen-driven iReport.

But the videos, captured by compact digital cameras and cell phones, told the most dramatic stories. Example: This 40-second video of young woman, Neda Soltan, dying. It’s seared into my psyche, like the image of the student standing before tanks in Tiananmen Square a decade ago. The video is raw and unfiltered. It’s the kind of footage that only a few years ago professional news organizations could capture and broadcast, and there would have been tight control over when and how it was broadcast and copyrights against redistribution. Now, people can self-broadcast to YouTube.

The recent wave of protests sweeping Northern Africa and the Middle East were similarly documented and even coordinated. Some countries shut down or sought to limit Internet access, in attempts to control information's flow and prevent protesters from communicating with one another -- in Algeria, Egypt and Syria, for example. Look how well-documented was the Japanese earthquake and Tsunami, such as these videos posted to YouTube.

I can't help but wonder what the availability of these tools might have meant 10 years ago today. What if people trapped above the raging fires where the planes impacted the Twin Towers could have posted last-minute photos (via service like TwitPic) or videos (to YouTube). Messages to friends and family -- and to everyone trying to cope with national trauma. Forensic investigators could have used the videos to better reconstruct what happened to the towers and when, as they sought to understand what brought the towers down and what changes should be applied to future buildings.

What if because of Facebook Wall Posts or tweets, more people rushed to get out of the towers faster. Confusion and miscommunications during the early minutes after each plane's impact kept many people in place. Sure there were text messages, but many Facebookers are obsessive about checking their mobiles. Many people follow breaking news events on Twitter. Many more lives could have been saved, if people had this information in hand on their mobiles.

What ifs are pointless, I know. But they mean something for now and the future. I'm glad we have these social media tools. Humanity is closer because of them, and news of disasters or other important events travel faster now than five years ago and certainly a decade ago this on this tragic day.