Netflix goes from bad to worse 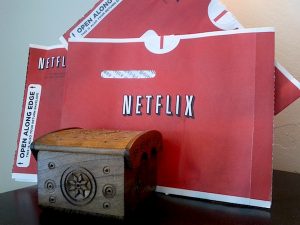 Netflix's woes took a strange twist on Sunday night, in an 11:59 p.m. EDT blog post by CEO Reed Hastings. "I messed up", he begins. Yeah, based on subscriber losses and punishing shareholders, Hasting puts it mildly.

The gist is this: After jacking up the price of combined DVD rentals and streaming by an astonishing 60 percent, Hastings presents an unexpected solution: Netflix is splitting its streaming and DVD rental business into two operations. The DVD biz will be called Qwikster. It's totally unimaginative nomenclature and doesn't the least bit describe the DVD business. Shouldn't Reed be fixing problems, rather than be creating more of them?

we realized that streaming and DVD by mail are becoming two quite different businesses, with very different cost structures, different benefits that need to be marketed differently, and we need to let each grow and operate independently. It’s hard for me to write this after over 10 years of mailing DVDs with pride, but we think it is necessary and best: In a few weeks, we will rename our DVD by mail service to 'Qwikster'. We chose the name Qwikster because it refers to quick delivery. We will keep the name 'Netflix' for streaming...Andy Rendich, who has been working on our DVD service for 12 years, and leading it for the last 4 years, will be the CEO of Qwikster.

Hastings preceded the announcement by offering an "explanation" for his mess up: "It is clear from the feedback over the past two months that many members felt we lacked respect and humility in the way we announced the separation of DVD and streaming, and the price changes. That was certainly not our intent, and I offer my sincere apology. I’ll try to explain how this happened".

But the apology may not be enough. Netflix announced the price changes in July, causing subscriber revolt. More than 4,300 people have responded to a Betanews poll asking their response to Netflix price increases; about 59 percent said they will cancel their accounts.

Investors punished Netflix shares following the pricing announcement and again 18 days ago when Starz canceled its streaming contract. Then on Thursday, Netflix delivered news no one wanted to hear: Lower subscriber numbers. Netflix says it expects to end the quarter with 2.2 million DVD-only subscribers instead of the 3 million projected in July, and 9.8 million streaming only customers instead of the 10 million it had previously forecast. Combined that works out to 1 million fewer subscribers than the 25 million Netflix expected. Shares plunged by nearly 19 percent on Friday before closing down 8.31 percent.

Is separation really the answer? "Some members will likely feel that we shouldn’t split the businesses, and that we shouldn’t rename our DVD by mail service", Hastings writes. "Our view is with this split of the businesses, we will be better at streaming, and we will be better at DVD by mail. It is possible we are moving too fast -- it is hard to say".

I don't think it's hard to say at all. Netflix is having a bad summer. In business perception is everything. Exactly what positive perception does this move create? Customers that want both DVDs and streaming will still pay more -- and with increased complication. Prices won't change, but billing and other logistics will. Hastings writes:

Qwikster.com and Netflix.com websites will not be integrated. So if you subscribe to both services, and if you need to change your credit card or email address, you would need to do it in two places. Similarly, if you rate or review a movie on Qwikster, it doesn’t show up on Netflix, and vice-versa.

This is supposed to be better? You tell me, please, in comments.

80 Responses to Netflix goes from bad to worse