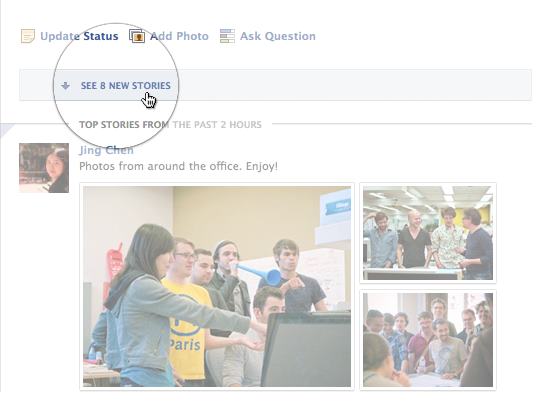 On the same day that Google+ opened itself up to the masses, Facebook launched its latest redesign. The change seems almost ironic considering the opposite trajectories these two social networks are on: Google+ on the way up, Facebook on the way down.

Forget the hit piece that journalism professor Dan Reimold wrote earlier this week for PBS calling Google+ a "ghost town." Even if Reimold's premise was even remotely correct (he needs to remember that up until now, Google was invite-only so of course usage is sparse), that's about to be blown out of the water.

Why? The new Facebook layout sucks, period. While the last redesign split the news feed into a Facebook-decided "top news" feed and the live feed, the two have now been combined. There's a problem though: I've yet to figure out how the new system's supposed to work and now there appears no easy way to get back to the way things were.

Instead, that live feed has been replaced with an all-but seizure inducing ticker on the upper right hand corner of the page. If you're like me and getting close to having many hundreds if not thousands of friends, this thing can move so fast that it's useless.

But back to this new news feed. Like I said, I have no clue how it works. Facebook claims it places your top stories at the top, with chronological statuses below that. Uhh, at least for me this is not working: all I saw were top stories, now denoted by a blue triangle at the upper left of the status itself, and no recent statuses, at least on the first pageful.

I have been able to figure out how to get to what seems to be close to the old live feed, but I had to click away from the home page first and then come back. That's a pain in the rear.

The events list, which I always liked, is now condensed into your most recent event and pushed further down the column to make way for the new ticker, making that nearly useless, too. Ads are untouched though; isn't that a shocker?

Can you tell I am not a fan of the new Facebook? You don't have to take my word for it.

Over on Google+, the change may cause blogger Daniel Ionescu to use that service more: "I guess I should start using this more, since it's open for everyone and the new FB design is annoying to say at least."

Bloggers and journalists aren't the only haters. Among my own personal friends, finding fans of the new layout were very difficult to come by. "New facebook is freakin creepy," one said. "And you wonder why I was tellin everyone to get on Google+...enjoy your 'new and improved' Facebook lol," another mused.

It doesn't get much better from there: "I definitely prefer being able to toggle from most recent to top stories," complained a friend. I may have found a fan of the new system though: "I don't mind these changes. I like the activity feed. (I don't like the chat becoming archived as messages and continued conversation, that's broken). But it seems the biggest change is that every story in my feed has to do with Google+. Bet they didn't see that coming."

See, the biggest winner here is indeed Google+. Facebook has a long and sordid history of making changes to its product that a majority of its users either are at best nonplussed by, and at worst downright angry about.

But there was a huge difference in the past. People had nowhere to go, so essentially Facebook could tell you to shut up and take it. With Google+ now becoming a viable option, and now available to anyone, that's no longer the case.

Facebook, you need to stop. Based on the reaction I'm seeing on my own news feed and across the web, there aren't many that care for this latest redesign. You can't tell me that this didn't come up in testing. There's just no way.

If Facebook continues to take advantage of its users like this, it will end up like MySpace. Customer satisfaction is now job #1 for Mark Zuckerberg and the Facebook leadership team -- now with Google+ in the rear-view mirror, and they're doing an awfully crappy job of it.