What can you expect from new Firefox versions? 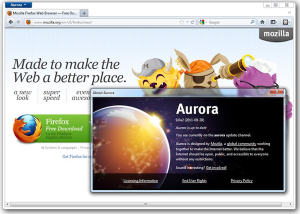 Mozilla has started the Firefox development merry-go-round again, updating its Beta, Aurora and Nightly builds to versions 8, 9 and 10, respectively.

The most significant changes between all three versions can be found in Firefox 8 Beta, which includes a number of notable improvements and new features. But there’s also an alternative Nightly build, called Firefox 10.0a1 UX. What is it, and what sets it apart from other releases? Which version should you install? Read on for our updated guide to what’s happening with Firefox.

This is the latest stable release of Firefox, and as such is recommended for most users. While noticeable new features are thin on the ground, performance has been vastly improved across the board thanks to improved memory management, which ensures the program no longer gobbles up memory the longer it’s left running.

With the memory hole plugged, Firefox 8 Beta sees attention turn back again to implementing new features and tweaking the user interface. This is apparent from the moment you first upgrade to version 8 -- a new Add-Ons compatibility assistant launches disabling incompatible add-ons and giving you the option to selectively disable others. Once complete, you won’t see this window again until the next time Firefox updates (to 8.0.1).

Related to this is a major sea-change to how Firefox views add-ons. Prior versions installed third-party add-ons without question, now the user must verify they wish to install each add-on. A new option “Don’t load tabs until selected” has been added to the Option dialog box allowing users who restore tabs from previous browsing sessions to speed up the loading process by not refreshing each tab until it’s selected.

The History window has also been tweaked to allow users to display their Downloads history there, too, while swapping and detaching tabs reveals a new graphical effect to make the action more visible.

Firefox 8 Beta will install over the top of any existing stable release, so while it has undergone a lot of testing to this point, it's still not stable enough to be considered safe for less-experienced users, although it’s likely to be robust enough for most day-to-day browsing needs. If installing the beta, take a backup using a tool like MozBackup before you begin.

Firefox 9 was supposed to see the start of the radical user interface overhaul, which is due to complete by the end of the year. This will see a browser streamlined to look more like Chrome, but sporting a lot of functionality hidden away. Unfortunately it appears none of these changes will be appearing in Firefox 9 as it begins its move to a stable release -- the interface looks as it has in previous versions. As a result version FF9 contains little in the way of noticeable new features.

Firefox 10 Nightly is most notable for coming as an integrated installer for Windows with a 64-bit build included, which is automatically installed on machines running a 64-bit version of Windows. 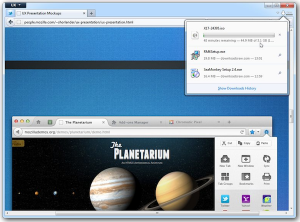 The newest Firefox 10 build looks much the same as the Aurora build at present, but Mozilla offers a parallel Nightly build, called Firefox 10 UX, that allows you to gain a sneak peek into the interface changes Mozilla hopes to implement by the end of the year. Installing this reveals that some of the tweaks outlined back in August are starting to make their appearance.

These include a streamlined top part of the browser, with forward and home buttons removed by default. Also missing is the Address and Search bars when you switch to a pinned web app tab, such as twitter.com. The search box has been tweaked to display the currently selected search engine as a clickable button on its right -- click this to visit the search engine’s home page.

The Download Manager has also been revamped -- when you start downloading a file, it’s no longer displayed in its own window; instead, a download icon appears in the top right-hand corner of the Firefox window: click this to see a list of recently downloaded files.

Finally, there’s also a new Tab page, which displays a list of bookmarks and recently visited web sites in place of the traditional blank page. It all adds up to a radical overhaul of the Firefox interface, and you can preview it now. Firefox 10 UX installs alongside all other Firefox builds, including Firefox 10 Nightly.

Which version of Firefox should you try? The Beta and UX builds contain the most interesting changes at the time of writing, but stick to the most stable version you feel comfortable with, and if you do decide to give the Nightly or UX builds a try, back up first, or use a non-critical machine or virtual setup (try VirtualBox), just in case…

25 Responses to What can you expect from new Firefox versions?